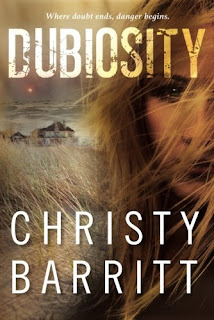 Savannah Harris vowed to leave behind her old life as an intrepid investigative reporter. But when a friend raises suspicions about two migrant workers who’ve gone missing from the sleepy coastal town calls home, her curiosity spikes.

As ever more eerie incidents begin afflicting the area, each works to draw out of her seclusion and raise the stakes—for both and the surrounding community. Even as ’s new boarder, Clive Miller, makes her feel things she thought long forgotten, she suspects he’s hiding something too, and he’s not the only one. Doubts collide in ’s mind: Who can she really trust?

As secrets emerge and danger closes in, must choose between faith and uncertainty. One wrong decision might spell the end…not just for her, but for everyone around her.

Will she unravel the mystery in time, or will doubt get the best of her?

DUBIOSITY is one of Ms. Barritt’s more recent books. I’ve been a long time fan of her novellas and Love Inspired Suspense, and even her Crime Scene Cleaner mysteries so I was looking forward to reading this book.

lived alone in the wilderness and kept to herself after she loses her husband. She gives up her job and becomes a recluse of sorts. But then a migrant worker dies of cancer, except he claims on his deathbed that he was murdered. Someone is also stalking , and a creepy new boarder adds to the drama.

This is not the best Christy Barritt book I’ve read. The characters were rather flat and one dimensional and I couldn’t make myself care. I tried, telling myself it was my mood, putting the book down and coming back to it later. It didn’t work.

The writing was good. Impeccable. I loved the Christian message. If you love Christy Barritt, you might like it. This one was a miss for me.

I obtained this book from the author in exchange for my honest review.
at July 16, 2015