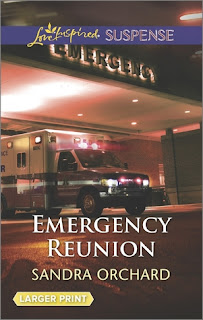 SAVED BY THE SHERIFF'S DEPUTY

Paramedic Sherri Steele refuses to believe someone's out to get her—until she's held at knifepoint in her own ambulance. It'll take her high school crush to convince her she needs protection—and deputy sheriff Cole Donovan is as persuasive as he is handsome. But when his brother rises to the top of the suspects list, Cole's torn between family duty and the woman he's never forgotten. With every emergency call to the paramedics turning into an attack on Sherri's life, Cole's convinced Sherri has a stalker. Cole needs to know whether his brother is the culprit before things spiral out of control. Survival—and a future with Sherri—depends on discovering who wants to cause trauma to this EMT.

EMERCENCY REUNION is the first book I read by this author. I’ve seen a lot of positive reviews about her books and was anxious to read one.

Sherri is a paramedic, quick on her feet, but rejected by her peers. She feels it’s because she “let her partner die.” She works an inner city route, complete with prank calls, drug addicts intent on robbing the ambulance, and crazies with multiple personalities. Cole is a new deputy, his brother a known druggie, and definitely over-protective toward Sherri, to the point of stalking her once his brother is caught attempting to rob the ambulance. He believes Sherri is being targeted, despite her argument that stuff happens to all the paramedics/EMTs.

I didn’t figure out who-dun-it as quickly in this book as I normally do. The story was very well-told and kept to the Love Inspired formula very well with the heroine constantly in danger (though she was often so into her job she didn’t think about it until it happened.)

I enjoyed reading about the life of an inner-city paramedic and the stuff they might encounter, including the trauma of losing someone they care about, and the need to talk about their feelings afterwards.

You can read an excerpt on Amazon to see if you like Ms. Orchard’s style.

I obtained this book from the author in exchange for my honest review.
at July 14, 2015