If the Shoe Fits 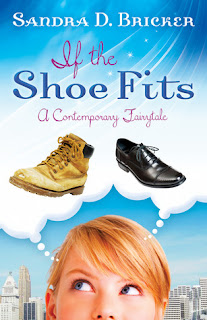 If the Shoe Fits: A Contemporary Fairy Tale

Meet Julianne Bartlett, a brilliant young attorney ready to start her own law firm with her best friend—and virtually constant companion—Will Hanes. Julianne has been waiting her whole life for her Prince Charming to gallop in on his white steed. Will rode up on his 10-speed bike while they were still in grade school—but who meets the perfect guy right in the middle of a cul-de-sac?
On the way to her new office, Julianne screeches to a halt after a mysterious Prince Charming loses his toolbox and work boot in a busy intersection. He’s gorgeous . . . and he’s a caring dog-rescuer, too! How far she will go to grab the attention of the prince who begins to look less and less charming all the time?
Shriek with laughter—and embarrassment—as your new best friend, Julianne, goes on a collision course with God’s impeccable plan!

My thoughts: IF THE SHOE FITS is a funny romantic comedy that was LOL at times. Julianne is a over-the-top drama queen, high maintenance, Elle Woods type lawyer/animal rights activist/fashion diva... and then she meets Prince Charming. He is rescuing a dog from the middle of the road in the rain and drops his tool box and a boot...

Julieanna's detective skills are top-notch and she tracks him down, asks him out and then proceeds to make a  major idiot out of herself over a man (and I'm sure most of us will relate to that, we all - well, maybe some of us - have that one  man that we went la-la over and wish we never would've met him later. Yeah, that guy.)

I mostly enjoyed the story. The sexual tension between Will and Julianna was in the negative range. The over-the-top drama was off the charts high. And I'm not going to say I loved it. I didn't. But I didn't dislike it either.
at October 01, 2016