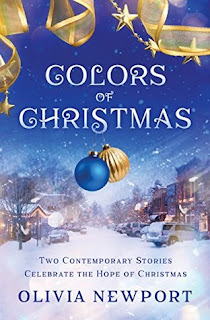 Celebrate the joyful hope of the Christmas season as characters find healing in the midst of heartbreak.
New from Olivia Newport!

Christmas in Blue
In the wake of a personal loss deeper than anyone realizes, Angela plans to bypass as much of the season as possible and get through her duties as the church organist by going on autopilot. Instead, she finds herself in charge of the town’s celebration. After a mysterious young man arrives, townspeople suspect he is the reason that one set of plans after another disintegrate until little is left of their traditions. Yet Angela warms to Gabe because she suspects they share a secret—his real reason for coming to town. Even when all they have to work with is a garish supply of blue Christmas decorations, Gabe helps Angela discover the hidden beauty of hope.

My thoughts: Since Christmas in Gold is actually the first story in this book, I went into CHRISTMAS IN BLUE expecting women's fiction and not a romance and that is what it was. Women's fiction.  I have read some reviews on this book earlier, trying to decide if I wanted to buy it or not and some commented how much they hated the second story.  I LOVED IT.  Yes, it was a bit slow and yes, it did start with a death and someone depressed, but it showed how one could overcome obstacles in the most unexpected ways if they are open to them.  This was actually my favorite of the two stories in this book.

Christmas in Gold
After eighty years, change is nothing new for Astrid. By the time she was twenty, she survived the destructive Nazi regime, caring for her family under brutal circumstances, moving to America, and losing her husband. At forty she was widowed again and left to build a new life with her children. Now, when she faces a move into an assisted living community and meets a young woman on the brink of despair, she resolves to stir up hope through tragedy one more time.

My thoughts: CHRISTMAS IN GOLD is a sweet novella about an eighty year old woman with memories and hope and a thirty year old therapist who has no hope.  It was a good story and I enjoyed reliving Astrid's memories and her overtures of friendship with Carly, but it felt unfinished. Astrid's Christmas was sweet, but Carly's story is unfinished. I would've liked to have her story developed more and wrapped up for a HEA.  This is not a romance, though, but women's fiction and rules are different. There is no romance in the story.

My overall thoughts:  I enjoyed this collection of two novellas by Olivia Newport and recommend them to anyone who needs hope, likes women's fiction or loves Christmas stories.

I was given a copy by a friend (not the publisher or the author) and all opinions are my own.
at April 05, 2018

Christmas in Blue was my favorite tale, too. Christmas stories any time of the year are refreshing to read. 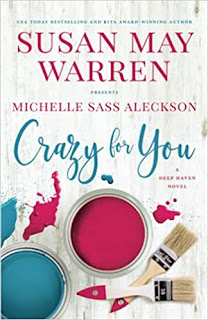