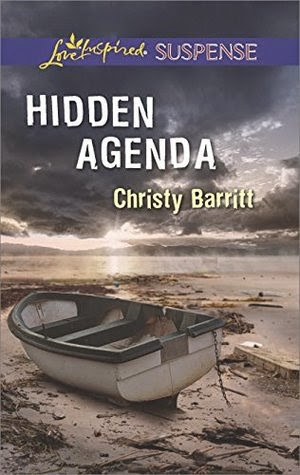 TO CATCH A KILLER

Trusting the wrong person had gotten his father killed. CIA agent Ed Carter isn't about to repeat the mistake. Pulling a gun on nurse Bailey Williams may not have been the smartest idea, but the beautiful caretaker is Ed's only suspect in the murder. Problem is, her vulnerable brown eyes claim innocence and set off his protective instincts.

The spark between them is undeniable, but Bailey could never trust her life—or her heart—to a man who thinks her guilty. But when the real killer returns and threatens not just her but her family, Bailey must place her faith in the only man who can keep them from being silenced forever…

HIDDEN AGENDA is a based on a secondary character in Ms. Barritt’s holiday novel, High Stakes Holiday . That was a great book, and romantic suspense fans will want to read it, even though HIDDEN AGENDA stands alone. I want to go back and reread that book, since I don’t remember Ed from it.

Neither Ed or Bailey were very trusting. They were both suspicious of the other, with good reason. Ed believed his father was murdered. The only suspect he can see is Bailey—especially when he discovers she’s named in the will.

But there is someone else there, someone apparently living in the mansion with them, and watching their every move. What bothered me most is he kept threatening Bailey and telling her that if she values her sister’s life she won’t tell Ed, yet the killer keeps leaving obvious clues that he’s there and threatening her—and leaving them where Ed can find them. Bailey wasn’t too smart to not pick up on the fact that Ed—who is a lawyer and a CIA agent—is intelligent enough to figure things out on his own. And the “bad guy” wasn’t the brightest crayon in the box either.

The story is well written with plenty of red herrings to keep the reader guessing who-dun-it. I learned some things I didn’t know about the world of espionage. Interesting book with lots of action. Love Inspired Suspense likes the heroine kept scared and on the run in their books and Ms. Barritt succeeds in writing edge-of-your-seat romantic suspense.