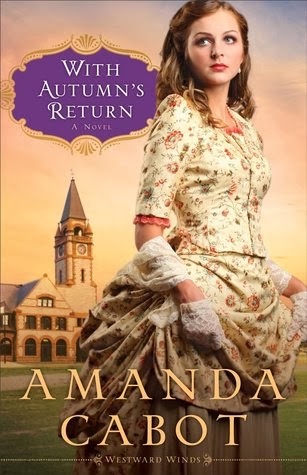 Elizabeth Harding arrives in , to establish her medical practice thanks to the wooing of her two older sisters who extolled the beauty of the land. She's certain she'll have a line of patients eager for her expertise and gentle bedside manner. However, she soon discovers the town and its older doctor may not welcome a new physician. Even more frustrating, the handsome young attorney next door may not be ready for the idea of a woman doctor. For his part, Jason Nordling has nothing against women, but he's promised himself that the woman he marries will be a full-time mother.

Despite their firm principles, Elizabeth and Jason find that mutual attraction--and disdain from the community--is drawing them ever closer. And when the two find themselves working to save the life and tattered reputation of a local woman, they'll have to decide how far they're willing to go to find justice--and true love.

WITH AUTUMN'S RETURN is beyond a shadow of a doubt, Ms. Cabot's best book yet. I couldn't put it down! is a female doctor, struggling to make it in a man's world, but unlike other books I read with historical female doctors, is friendly, approachable, quick to forgive, and beautiful. Not only that, but she is ready and willing to defend her position in the medical world, and yet willing to take patients most respectable women shy away from.

Jason is an attorney, and as the book opens he is in court defending a man accused of murdering his wife. Only after the trial ends, he learns the man was not innocent, and he was duped--big time. Now the town is torn in whether to trust him or not. A lot of the town folk openly shun him.

There is a hint of a suspense in the pages. People are being murdered--who will turn up dead next?

When I opened this book I thought - oh, no. Another female doctor. But Elizabeth and Jason won my heart. This it the third book in Ms. Cabot's Westward Winds series. Even though it stands alone, readers will want to read Summer of Promise and Waiting for Spring first. This series and especially WITH AUTUMN'S RETURN is highly recommended.

I'm absolutely thrilled that you think With Autumn's Return is my best book yet. I try to make each book at least a little bit better than the previous one, so I'm happy to know that I've succeeded in doing that. Thanks so much for helping to spread the word about my book.