The Doctor's Blessing and Hannah's Journey 2 - in - 1 book 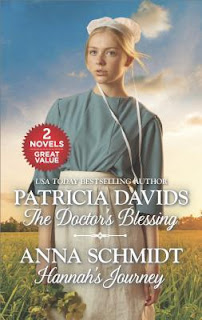 Men and women follow their hearts in Amish Country

The Doctor's Blessing by Patricia Davids

Amber Bradley is a nurse midwife in Amish country, helping Amish women to be able to deliver their babies safely at home. But when the new doctor arrives in Hope Springs, he is totally against home births and refuses to sign the release forms to allow her to do her job.

Dr. Phillip White is the grandson of the owner of the clinic, and he is there on a temporary basis while his grandfather recuperates from an injury. Phillip is expecting his stay to be relatively quiet in the rural area, but is stunned to find it is largely Amish. When the Amish refuse to patronize him, he loses most of his patient base due to his refusal to allow home births.

Amber is attracted to the handsome doctor but angered by his refusal to recognize her career as real and viable. What will it take to convince Phillip to recognize Amber as a midwife, the Amish right for home birth, and to decide that maybe Hope Springs isn’t so backwoods after all?

My thoughts: THE DOCTOR’S BLESSING is the second book in Ms. Davids Brides of Amish Country series. While not technically an Amish book, the Amish are well represented, and there is a lot of facts given about them and their lifestyle in this book. I enjoyed a midwife theme too, as I had most of my children at home with a midwife.

Hannah Goodloe is an Amish woman, desperate to find her eleven-year-old son, Caleb. Caleb had visited a circus the day before and that night had vanished. Hannah believes he ran away to join the circus, so she gathered her courage and went to visit the owner of the circus, Levi Harmon, to request that he return her son.

Levi is a bit confused by the Amish woman’s request and questions her as to why she believes that Caleb would have joined his circus. He can’t be bothered to find the boy himself, and knows his managers would locate him and return him if he has indeed stowed away on the train, but he tells Hannah that she must go on the trip with him and see to her son herself. To his surprise, Hannah, her father-in-law, and her sister-in-law, show up at the train station at the designated time.

Will Hannah find her son on that train? Will Levi unlock the doors to his past and open his heart?

My thoughts: HANNAH’S JOURNEY is a different type Amish story, in that it’s historical. Hannah is taken out of her world and thrown into one that is vastly more opulent than what she was accustomed to. But this unassuming woman quickly became assuming, making demands on Levi that things should be downgraded to her standards. Levi catered to every complaint she made, though she covered them all saying they were for her father-in-law and or sister-in-law’s comfort.

I can’t really say I enjoyed this book. The conversation was stilted, I couldn’t relate to the characters, and I found some of the things unbelievable. This is the first of several books in her Celery Fields Series, set in Sarasota, Florida. Or, in this case, a circus train traveling cross-country from Florida to Wisconsin.

I got a copy of this book from a local library and was not required to write a review. All opinions are my own.
at December 16, 2017

I've read other books by Patricia DAvids but not this one. Anna Schmidt is a new author to me. Thank you for sharing your review. So nice when libraries carry Love Inspired books.