Scene from Mercury Rising by Tim and Gail Sattler 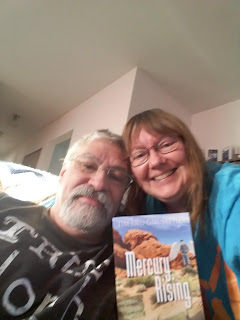 Bio:  Gail Sattler lives in Vancouver BC Canada, where you don't have to shovel rain. When she's not madly writing (Gail Sattler has over 40 published novels and novellas, plus a few works of non-fiction) she plays bass for an Elton John tribute band as well as a community jazz band, plus she plays piano for a smaller private jazz band. When she's not writing or making music (or at her day job) Gail likes to sit back and read a book written by someone else, along with a good cup of hot coffee. 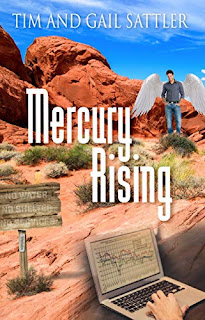 Michael wants to save his daughter, but first he’s got to save the world.

Michael and Charlotte meet when Michael is trying to find Ashley, his missing daughter who has fallen into drug abuse, and Charlotte is searching for her son Jon, a brilliant and aspiring young scientist who has also gone missing.

Ashley and Jon should have nothing in common, but after the murder of Jon’s favorite professor, they become ensnared in a tangled web that becomes worse with every new discovery.

When Michael and Charlotte join together to figure what their children have become involved with, they, too, are sucked into a sinkhole for which there are no answers, only more questions.

When all seems lost, will they all recognize the source of strength offered to them, and… will they take it? 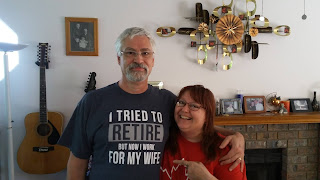 Mercury Rising is the first book co-written with my husband, Tim. How romantic is that? Most of it was plotted when we were out walking with our two dogs on the Alouette River dike - https://www.alltrails.com/trail/canada/british-columbia/alouette-river-dykes-trail - nice long walks unless they were shortened when other walkers told us they’d seen a coyote! However, most of those walks were done after dropping off our youngest son at school, so Dairy Queen wasn’t open yet to get a blizzard. Oh well. It was still romantic, even without chocolate.

2Chronicles 20:15 - This is what the Lord says: Do not be afraid! Don’t be discouraged by this mighty army, for the battle is not yours, but God’s.

As Michael walked into the kitchen to see what was in the fridge, he slowed then stopped and looked at the silent phone on the wall.
Except for the voicemail he’d picked up yesterday, he couldn’t remember the last time the phone on the landline rang or anyone used it, and that included himself. He wasn’t as bad as Ashley for having his cell phone in his hand 24/7, but realistically, all his friends only called his cell phone, never the landline.
His bank, dentist, and all the places he’d done business with over the years, all had the house number. Maybe the weekend would be a good time to start changing his number with all his accounts everywhere and cancel the house phone.
As if confirming the lack of use of the house line, his cell phone sang out from his pocket.
The display showed the caller was Charlotte. He smiled and swiped to answer. “Hi, Charlotte. Did you just get the same text I did?”
He could almost hear the smile in her reply. “Probably. Since we’re both alone for supper, how would you like to meet for pizza or something?”
Michael looked down at his dirty work clothes. Even his socks were dirty. Today had not been a good day. He’d had to halt half his crew to dig up a tree by hand so as not to damage the roots or the pipe that the roots had surrounded. They’d been working on a historical renovation that involved moving the old tree and replanting it. Plus it had been a hot day, with not a cloud in the sky.
He raised one arm and sniffed.
It had really not been a good day. But the thought of sharing a meal with another adult was somehow making it better. Especially since that adult was the parent of someone who seemed to be so important to his daughter that she would make her bed in the morning.
“That would be good, but I just got home from work and . . .” His ears burned at his admission, “I really need a shower. I don’t think you’d want to sit next to me in a restaurant.”
There was a pause on the line. Michael held his breath. Suddenly her reply had become important.
“I understand, but it’s so much nicer not eating alone. I’m not in any rush. Actually, there’s something I wanted to do before supper anyway. How about if I pick up a pizza when I’m done and come over to your place? If you don’t mind me inviting myself over?”
Michael looked around the kitchen. It wasn’t perfect, but it was reasonably clean. It wouldn’t take him long to take the few bowls out of the sink and put them in the dishwasher, then give the counters a quick wipe.
It had been a very long time since he’d had an adult woman in his home, much less his kitchen. The last time had been during Belinda’s funeral, and he hadn’t been in a great frame of mind back then. A few women from the church had brought over casseroles and other food on a regular basis for a while, even though the day of the funeral had been the last time he’d darkened the door of St. Luke’s. Eventually they stopped coming, and that had been fine with him.
But now, things were different. Even though he didn’t go to church anymore, Pastor Richard continued to phone on a regular basis, telling him that when the time was right for him, then he’d be able to pick himself up and move on. He’d said it was different for everyone and that he’d continue to pray for him, whether Michael went to church or not. He’d said that life would never be the same, but he would one day be able to start looking back on the good times more than the bad, to start to live again, and maybe even start to date again.
It looked like that day had come. For the first time since he’d lost Belinda, he actually looked forward to spending time with another woman.
He felt himself smiling as he answered Charlotte. “I don’t mind at all. In fact, I’d like that. I’ll text you my address. I’ll need about twenty minutes, which will be about the same time as a pizza. That sound okay?”
“That sounds great. I’ll see you soon.”
Michael swiped to cut the connection and turned his wrist to check his watch. As he looked at the time, he almost laughed. The time had been on his cell phone, and he hadn’t even looked at it, even though it was right there as he’d hung up.
On good days, when Ashley teased him instead of arguing with him. She said he acted like an old man, and how he checked the time was one of her reasons.
He turned his wrist back so the face of his phone was toward him, and texted his address to Charlotte. After tucking the phone in his pocket, he placed everything from the sink into the dishwasher, wiped the counter, and jogged into the living room to straighten up a bit.
Before he could think of running into the shower he quickly made the bed, just in case Charlotte looked in on her way to use the washroom. Besides, if Ashley was going to start making her bed on weekdays, he figured he should too. He grabbed all the stray clothes from the floor, tossed them into the hamper, and hurried into the bathroom. Today, he would be a new man in record time. 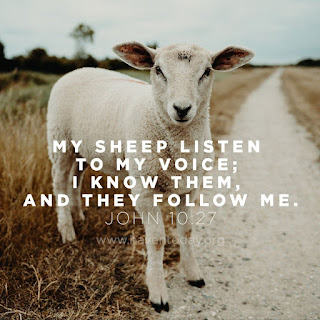 sounds like great book! I won it on Lena Nelson Dooley's blog but never received it! Shelia sheliarha64(at) yahoo(dot)com

What fun getting to write with your spouse!