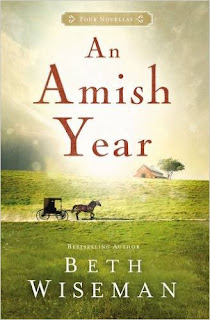 
Spend a year in Amish country with four sweet romances.
Rooted in Love (previously published in An Amish Garden)
Rosemary Lantz is doing her best to run her family’s household. She excels at all her tasks except one: gardening. Saul Petersheim has pursued Rosemary for years, but Rosemary keeps turning him down. What Saul doesn’t know is that she has good reason—something no one can know—especially not him.

My thoughts:  I read Rooted in Love in An Amish Garden, but I didn't remember it, so I reread it.  Saul is stubborn, proud, and just like a man, ignores his injuries--he's also somewhat of a wimp and can't handle seeing his arm all torn up from an accident.  Rosemary is opinionated and holds the power of hurting several people in her hands. When she discovers long held beliefs are not true is she strong enough to change her opinion? Apologize? I loved Saul's tenacity and how he is so willing to serve Rosie and her family despite his physical and emotional pain. A good novella with a garden theme. 4 stars.
A Love for Irma Rose
The year is 1957, and young Irma Rose has a choice to make. Date the man who is “right” for her? Or give Jonas a chance, the wild and reckless suitor who refuses to take no for an answer?  Irma Rose steps onto the path she believes God has planned for her, but when she loses her footing, she is forced to rethink her choice.

My thoughts: This was a cute story. More telling than showing at first, but it picked up about  midway through. Jonas was a lovable rascal and Irma Rose is the love of his life--but she doesn't know it. Instead she's dating someone else. When Jonas's mother ends up in the hospital with a bad ulcer things change and not for the better. I enjoyed these two characters and it is the prequel to Ms. Wiseman's best selling family saga series, Daughters of the Promise.  4.5 stars.
Patchwork Perfect
Eli Byler has been a widower for two years when he chooses to make a fresh start in Paradise, Pennsylvania. As Eli juggles the admiration of two women, he meets Miriam Fisher—the most unconventional Amish woman he’s ever met. She doesn’t fit the mold for what Eli is looking for, but it isn’t long before Eli realizes that Miriam is everything he wants. But Miriam has no plans to get married—ever.  Will Eli be able to change her mind?

My thoughts:  This story was fairly predictable, but good. I enjoyed getting to know Miriam and glad Eli knows his own mind and isn't willing to settle for just anyone. The way it ended was sweet, but as someone who is also allergic to cats I wondered how they would work out that hurdle.  The side story about Grace and her boyfriend included a good message teenage girls need to hear.  4 stars.
When Christmas Comes Again (previously published in An Amish Second Christmas)
Katherine knows the first Christmas without Elias will be hard for her and the children. But when a mysterious Englischer appears with photographs of her late husband, Katherine begins to wonder what other blessings Christmas could have in store.

My thoughts: When Christmas Comes Again wasn't technically a romance, though Katherine's oldest daughter has a beau. It was women's fiction. I enjoyed getting to know Katherine and hearing some of the details of her deceased husband's life--that he didn't even know. I enjoyed reading this story. Ms. Wiseman's writing talents shine with women's fiction. 4.5 stars.

I enjoy these collections of four Amish novellas that Thomas Nelson has begun putting out. And I was so excited when this collection came up for review with Booklook. I was glad when it arrived as I was anxious to read it.
at February 13, 2016