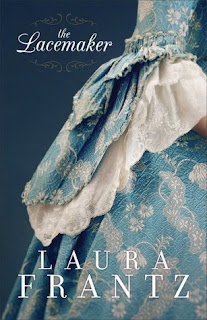 It is the eve of a new age of freedom in the colonies. But can a proper English lady dare hope for her own independence?

When colonial Williamsburg explodes like a powder keg on the eve of the American Revolution, Lady Elisabeth "Liberty" Lawson is abandoned by her fiancé and suspected of being a spy for the hated British. No one comes to her aid save the Patriot Noble Rynallt, a man with formidable enemies of his own. Liberty is left with a terrible choice. Will the Virginia belle turned lacemaker side with the radical revolutionaries, or stay true to her English roots? And at what cost?
Historical romance favorite Laura Frantz is back with a suspenseful story of love, betrayal, and new beginnings. With her meticulous eye for detail and her knack for creating living, breathing characters, Frantz continues to enchant historical fiction readers who long to feel they are a part of the story.

My thoughts:  THE LACEMAKER by Laura Frantz is a historical set before the Revolutionary War. Tension is high and while Tories and Patriots play nice when it comes to parties and engagements they are not so nice when politics are involved.  Elisabeth's family is loyal to the British crown (except her mother) and now they are fleeing Patriot loyal Williamsburg, Virginia to more British loyal Yorktown, Virginia. Except Elisabeth didn't know... so she finds herself in danger, house destroyed, servants gone, and at the mercy of rebel-rousers.

I was excited to start this book because I've been to Williamsburg and Yorktown (thanks to my Coastie son) and I could picture the scenery as I read about it. Sadly, the colonial Williamsburg in Virginia that I visited was vastly different than the one described in this book, but when I voiced my concerns I was reminded that the places we visited was more about Pilgrims and less about 1775.... Okay, that helped, so I could get past the differences between what I saw and what I read.

Noble - wow. He was cousin to Elisabeth's betrothed, and even though he was a Patriot he was quick to step in to help Elisabeth. He was hurting, yes, but he was an awesome hero. I wanted them to get together the second I met him in the pages of this book but with her betrothed it didn't seem likely. Then again, what is a romance without a happy ever after?

The story is slow, and there is zero sexual tension, but plenty of political tension, for those who like it light on the romance but heavy on the drama.


Fans of Laura Frantz and of stories set around 1775 will want to read THE LACEMAKER.

Political tension in a book doesn't always appeal to this reader. Thanks for your nice review.