You'll Think of Me 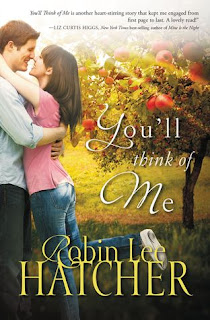 In a small town in Idaho's idyllic wine country where the past looms large, can two people realize their individual dreams for the future . . . together?
Abandoned once too often, Brooklyn Meyers never intended to return to Thunder Creek, Idaho. Her hometown holds too many memories of heartache and rejection. But when her estranged husband Chad Hallston dies and leaves his family home and acreage to her and their ten-year-old daughter Alycia, it's an opportunity to change their lives for the better—a chance Brooklyn can't pass up, for Alycia's sake if not her own.
Derek Johnson, Chad's best friend since boyhood, isn't keen on the return of Brooklyn Meyers to Thunder Creek. He still blames her for leading his friend astray. And now she has ruined his chance to buy the neighboring ten acres that would have allowed him to expand his organic farm. To add insult to injury, Chad's dying request was that Derek become the father to Alycia that Chad never was. How can he keep that promise without also spending time with the girl's mother?
Brought together by unexpected circumstances, Derek and Brooklyn must both confront challenges to their dreams and expectations. He must overcome long held misconceptions about Brooklyn, while she must learn to trust someone other than herself. And if they can do it, they just might discover that God has something better in mind than either of them ever imagined.

My thoughts: YOU'LL THINK OF ME is the first book in Ms. Hatcher's newest series. I got the second book to review and decided since I had this one buried in my to-be-read pile (on my kindle) I needed to read it first -- just in case they aren't stand-alone.

Brooklyn is a hurting woman, no mother, a father who is a bitter, angry, hurting man, and a husband who abandoned her as soon as he finds out she's pregnant.  To be fair, he does step up to the plate and will his deceased parents' house to him when he discovered he was dying, so Alicia would have a home.

Derek was greatly upset when he discovered Chad had given his land to the town bad-girl. Derek had an agreement with Chad that he would buy the property, and he almost had enough saved up for a down-payment. Worse, Chad asked Derek to step in and be the father Brooklyn's daughter never had.  Which meant Brooklyn would be seeing a lot of him, and she was his least favorite person. Didn't like her. Never had, never will.

But his grandma reaches out and  "adopts" Brooklyn, and Derek can't deny his best friend's dying wish, so he steps into Alycia's life to play dad. With being next door neighbors, an abandoned dog, Alycia's love of horses, and his grandma's interference Derek and Brooklyn are forced together.

A sweet romance, written to formula, with really no surprises. An easy read.