A Plague of Unicorns 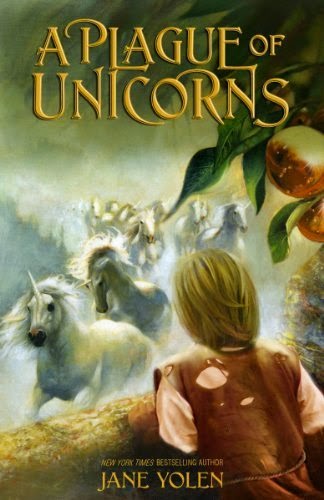 Young James, an earl’s son, is a bit bothersome and always asking the oddest questions. In despair—the last of James’ tutors having quit—his mother sends him off to be educated at Cranford Abbey. She feels the strict regimen will do him a world of good.

But Cranford Abbey has its own problems. It has been falling into disrepair. The newly appointed Abbot Aelian takes it upon himself to save the abbey with the use of his secret weapon: a recipe for golden apple cider passed down in his family for many generations. He believes that by making and selling the cider, the monks will raise necessary funds to restore the abbey to its former glory. Abbot Aelian has everything he needs—almost.

One obstacle stands in his way, unicorns that happen to feast specifically on the golden apples. Abbot Aelian and his men must fight off the unicorns to make the cider. He and the monks try to form a battalion to fight off the beasts; next they import heroes to fight for them. But the heroes run off, monks are injured, and a herd of ravenous unicorns continue munching. After no success, the abbot finally calls upon the most unlikely of heroes, one suggested by no other than young James. That hero is small and unprepossessing but possesses the skill to tame the beasts. Though wildly skeptical, Abbot Aelian must risk everything and believe in this recommended stranger or risk the fall of Cranford Abbey.

A PLAGUE OF UNICORNS is rather short but I liked it. I give it five stars. It held my interest all the way through and I couldn’t put it down. I read it in a few hours. I recommend this books for kids that are slow readers because its really short for avid readers.