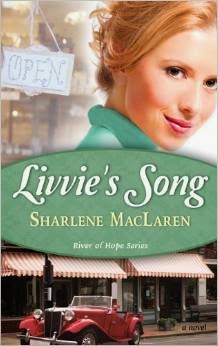 Life is far from a breeze for Olivia Beckman, owner of Livvie's Kitchen, a favorite of locals in . The widowed mother of two is struggling to make ends meet–no simple feat, especially when her cook turns in his resignation. Yet she's determined to pull through on her own, just as she did when God failed to save her beloved Frank.

Newly released from a ten–year prison sentence, Will Taylor is ready for a fresh start. With harmonica in hand–the only possession he values, aside from his Bible–he makes his way to Wabash, where a late–night meal at Livvie's Kitchen turns into a job opportunity when the outgoing cook learns about his restaurant experience. What he doesn't know is that the "restaurant" was a prison cafeteria.

But Will became a new man behind bars, thanks to a Christian friend, and he credits God's providence with landing him a job he loves. Soon, he cooks and bakes his way into the stomachs of his customers–and the heart of his employer. Both are hesitant, though, still healing from past hurts. A recipe for love between them will require sharing secrets, braving dangers, and believing God for a bright future.

LIVVIE’S SONG is an older story from Ms. MacLaren (I am horribly behind on reviews). I’ve been to , and it was fun reading a story set in a town I’m semi-familiar with. Will is a colorful character, hopping boxcars to travel and not getting haircuts to save money—but offering to pay double for meals and staying in a hotel because he had plenty to get by. (That was rather contradictory.)

Livvie took some getting used to. She wasn’t very nice to Will, not at all, at first. She was in mourning for her husband (dead one year) and Will is fresh out of prison. He talks about telling the truth, but won’t tell anyone he was in prison. He lets them believe he worked in a restaurant. There are some bad guys wanting something they believe Will has, which adds some excitement to the story.

Fairly predictable, but some twists. Slow moving, but does get better toward the end. 406 pages. Available in paperback and ebook.
at December 27, 2014