Adventure Bible: A Father's Love / The Berenstain Bears and the Biggest Brag 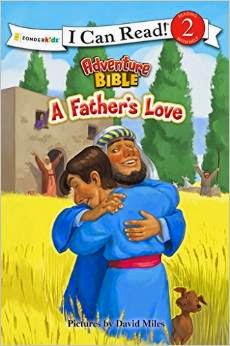 A Father’s Love is a level two I Can Read! based on the NIV Adventure Bible. In it, young readers learn about how great a father’s love can be for his child. At this read-alone level, newly independent readers follow a young man who decides to go out on his own, with his inheritance. He wastes his money and makes bad choices but eventually realizes that home and family are more important than anything. When he goes home to make amends, his father welcomes his son home with open arms and joy.

Written for the newly independent reader, vocabulary and content is at a more advanced reading level, making this series appropriate for children almost ready for their first chapter books.

This I Can Read! series of Bible stories makes use of the unique features found in the NIV Adventure Bible such as “People in Bible Times” and “Words to Treasure”.
Content aligns with the Common Core Standards for informational reading.

ADVENTURE BIBLE: A FATHER’S LOVE book is perfect for early readers (ages 4 – 8). Ones that might struggle a bit or feel a bit overwhelmed with the “thickness” of chapter books but they are almost ready for them.

My daughter and I enjoyed the simplicity of the story, the way it was written at a child’s reading level, and the pictures were engaging. It was a nice retelling of “The Prodigal Son” and showed a father’s love—even God’s love—unconditionally. Beautiful. 32 pages. Available in paperback. 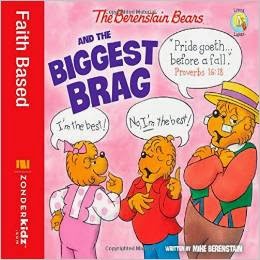 When he happens to overhear the cubs bickering about who can see the most unusual cloud formations, Gramps puts a stop to the argument. He reminds them that being proud of a special talent from God is one thing, but bragging about it is foolish. “Pride goeth before a fall!”

THE BERENSTAIN BEARS AND THE BIGGEST BRAG is perfect for early readers (ages 4 – 8). It’s also a good lesson for kids when they start bragging about what they can do and try to outdo others in their bragging.

My daughter and I enjoyed the simplicity of the story, the way it was written at a child’s reading level, and the pictures were engaging. Focused around the verse “Pride goeth before a fall” it teaches children about the dangers about bragging and pride. 24 pages. Available in paperback and ebook.
at December 30, 2014