That's Not Hay in My Hair 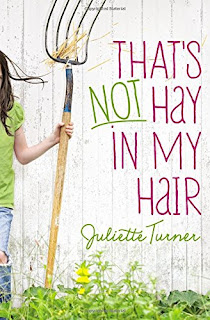 That's Not Hay in My Hair

New York City life had crammed sidewalks, gasoline-filled puddles, and angry taxi drivers, but Juliette enjoyed the towering sky-scrapers, the half-block walk to school, and the restaurant smells wafting into her bedroom. She had never cared for a horse, let alone a long-horn, when her mother announced their imminent move to a 300 acre ranch in Texas, where they would be caring for three horses, five dogs, twenty-five longhorns, and a cat … all by themselves.
Juliette couldn’t help feeling excited, even though she’d have to climb a hill to get a bar of cell-phone service. Soon she was running from bats and snakes, rescuing a calf from a twenty-foot ditch, medicating ponies, and having adventures so crazy it’s hard to believe they’re for real—but it all happened exactly how it’s written.
Get ready for side-splitting laughs, heart-wrenching tears, and surprising life lessons learned down on the farm and shared by fourteen-year-old Juliette Turner.

My thoughts (by Jenna):  THAT'S NOT HAY IN MY HAIR was a very good book. My only complaint was she killed a horse. (Isn't that illegal to kill a horse in a book? It should be.) Other than that, it was really, really, really funny. They had to save an animal every single day since they moved. Like one of the cows was jealous about not having a baby so it was trying to calf-nab. And it it ended up into a bovine brawl. That was really funny. I loved this book and highly recommend this book.  5 stars ++++
at March 28, 2016