When Love Gets In the Way 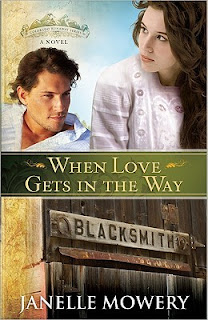 When Love Gets in the Way

Grace Bradley wishes all she touches would turn to gold. Instead, it tends to tarnish...that is, until she finds freedom on the Double K Ranch. Grace is fleeing from the man her father chose to be her husband. But once her heart is captured by her new employer's best friend, and she finally understands the meaning of God's sacrificial love, she relinquishes her independence to save her loved ones.
Cade Ramsey contemplates running for dear life from the accident-prone nuisance he brought to his hometown. The trouble that trails her seems to latch on to him at every turn. But when Grace manages to win his calloused heart, he chases her down, praying he can keep her from following through on a decision that could ruin their lives.
An adventurous novel of faith, hope, and love in the Wild West.
About This Series: Straight from the heart of the Old West, the Colorado Runaway series is full of adventure, humor, and romance by award-winning novelist Janelle Mowery.

My thoughts: WHEN LOVE GETS IN THE WAY has some really cute moments. Grace is feisty, willing to get her way by hiding in the back of a wagon piled full of lumber. Unfortunately she was discovered too soon. A shooting match by a mysterious horseback rider and plenty of other disasters follow in Grace's wake, making this unpredictable.A western with a runaway bride, bucking at expectations. The story is slow, the characters lack depth and seem to rely on the mishaps to keep the story flowing. 3 stars.
at March 10, 2016