Interview with Alice Arenz and giveaway!!! 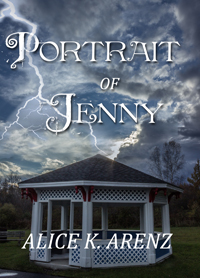 Today we are blessed to have Alice Arenz with us. Alice is very graciously giving away one ebook copy of her book, Portrait of Jenny to one commenter. Be sure to leave contact information!  *** Please note, Alice says there are about 100 swear words in this book, and it is written for the general market.***

Alice, it's so good to have you. Do you recall how your interest in writing originated?  I used to make up stories to tell family and friends, trying to find a way to excite them the way reading books excited me. By the time I was twelve, I was writing my first “novel,” The Adventures of Christopher and Christina. I did a lot of writing during study halls & the pages were passed down the aisles as I’d finish them. It was an awesome feeling!

What inspired you to write your first book? My first published book, The Case of the Bouncing Grandma, was inspired by the cozies being published at the time. I’d never read anything quite like them and was totally entranced. I asked God if He thought I could do that. Next thing I knew, I had at least a chapter or so without actual knowledge of having written it.  Don’t you just love how God works like that?!

I loved The Case of the Bouncing Grandma. So fun! Just as your books inspire authors, what authors have inspired you to write?  I love mystery/suspense—have as long as I can remember.  I just “gave” my 11 year old granddaughter one of my old books called The Ghost Rock Mystery (sorry I don’t remember the author).  I read that book so many times it’s in tatters! In my early teens Daphne Du Maurier, Phyllis A. Whitney, Mary Stewart, Victoria Holt, Dorothy Eden and so  many more were among my favorites. Whitney and Stewart were definitely my inspiration.

Do you have a specific writing style? The style would be a seat-of-the-pants writer. I never know where things are going for sure—there’s a lot of praying for guidance.  When I was frustrated with the Bouncing Grandma I asked God to at least give me the ending. He did—five words that made me anxious to find out what led up to them!

I'm a seat-of-the-pants writer, too. It's fun discovering as you write. What does your writing process look like?  A mess, mostly.  For the Grandma series, I had white boards filled with info I thought I might forget, a wall covered with character descriptions, and pieces of paper all over the place. It’s not always that bad. Mostly, though.

Is there anything you find particularly challenging in your writing? Everything—if I try to go it alone. I’m not kidding when I say that I pray a lot for guidance. Without God, I couldn’t do a thing. Period.

Yes, I pray for  my writing a lot, too. Is there a certain type of scene that's harder for you to write than others? The intermediary parts—you know, what gets you from point A to point B without making you want to yawn.  J

What writing advice do you have for other aspiring authors?  About six years ago, my publisher went another direction, my health got really sketchy and I believed writing was in my past. Then, last year, a dear friend, Bonnie Engstrom, suggested I contact her publisher and I not only got a contract for three new books, but after getting my rights back from my initial publisher, my first three books were re-issued! So the advice is that if this is something you really want to do, feel God leading you to do, ER, EVER, GIVE UP!  God will find a way!

How did you decide upon the title of Portrait of Jenny? This title had been floating around inside my head for years before I knew it had any importance. Then, in the way things sometimes happen, I suddenly knew why.

How important are names to you in your books? The “process” always seems to begin with either a title or a specific name.  For the Grandma books, it was the name Glory Harper; Mirrored Image, was the title; An American Gothic came from my fascination with the mystery/suspense novels of the 70s they were then calling “gothics” and with the wonderful ruin of Ha Ha Tonka here in Missouri.  It seems like everything flows from those initial gems.

If you had to do it all over again, would you change anything in Portrait of Jenny?  No, I wouldn’t. It’s exactly the way God wanted it. Unless there are typos I didn’t catch!

What was the hardest part of writing your book? Knowing in advance I would have to defend it—and me.

Who was your favorite character in Portrait of Jenny?  I love the lead character Richard Tanner. He’s very real and very honest.

Do you read your reviews? Do you respond to them, good or bad? Do you have any advice on how to deal with the bad?  Yes, I read them, but I don’t respond—though sometimes it might be tempting. As for how to deal—prayer, lots and lots of prayer.  Sorry if I sound like a broken record, but it’s the truth.

What book are you reading now?  I just started A Winning Recipe by Bonnie Engstrom.  Other than the reading involved with my own work, I haven’t really been able to read much these last three and a half years. That’s been really hard since I’d always read up to three books a week, but something I’ve had to deal with.

What are you working on now? What is your next project?  My next project is a Women’s Fiction called A Question of Survival. I was hoping to get this out by August, but haven’t been feeling well enough to write like I’d wanted.

Can you share a little of your current work with us? Survival is about spousal abuse—how and what lead character Jessica Keller does to survive.

Do you have anything specific that you want to say to your readers?  Some people have been disappointed in me because Portrait of Jenny is not published under the Christian banner, has approx. 100 swear words out of the 150,000 words, and because the male characters talk about sex (there is NO SEX in the book), and is “sensual” (once again, THERE IS NO SEX IN THE BOOK).  Jenny is a novel I wrote to obey what I heard God say about not “preaching to the choir.”  It is a mystery/suspense that deals with the past, the present, and the searching for love and direction on the part of the lead character Richard Tanner. Though I spend a good deal of time having to defend myself and this book, I am not ashamed of it or its content and I thank God for giving me this story and the conviction to write it as He wanted.

Thank you, Laura, for having me on your blog. May God bless you and your readers.

Not even a beautiful woman can save Richard Tanner from his past.

Following an explosive—and public—argument with his ex-girlfriend, artist Richard Tanner races into a rainstorm, gripped by a powerful migraine. He wanders to the gazebo in University Park, where he meets the beautiful and mysterious Jenny—a brief encounter that leaves an indelible impression on his mind—and in his paintings.

When Detective Jack Hargrave accuses Richard of the brutal assault on his ex, he finds himself confronting demons of a past he doesn’t remember. A time when little Richie Tanner walked into University Park whole, was beaten and left to die…a time that may hold the key to his future. 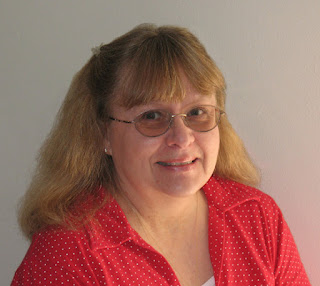 Romantic mystery/suspense Portrait of Jenny is the newest book of 2010 ACFW Carol Award winning author, Alice K. Arenz. A member of American Christian Fiction Writers, her first three novels were honored by two finals and one win in ACFW’s Carol Award: cozy mysteries The Case of the Bouncing Grandma (a 2009 finalist), The Case of the Mystified M.D., (2010 winner), and mystery/suspense Mirrored Image (a 2011 finalist), all re-released by Forget Me Not Romances, a division of Winged Publications. Last August, An American Gothic, also a romantic mystery/suspense, was released by Forget Me Not Romances.

Sounds interesting, thanks for the warning about the swearing.

Thanks for letting readers know about the swearing. Not something I enjoy in books.

Thank you Laurie and Marilyn for visiting this blog--and many thanks to Laura for hosting me. If you prefer mystery/romantic suspense with a more Christian bent, you might check out my other books--especially if you enjoy the fun and laughter of a cozy. THen the BOUNCING GRANDMA books might be for you. God Bless, alice

Thanx for the giveaway. I could share this with my husband.

congratulaions To Annie B