Interview with Heather Blanton and giveaway!

Heather is graciously giving away one copy of her book, A Promise in Defiance to one commenter! Please include contact information. 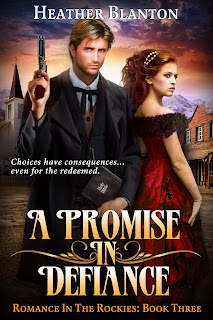 ~~~The haunting final chapter in the series!~~~

CHOICES HAVE CONSEQUENCES...EVEN FOR THE REDEEMED.

When Charles McIntyre founded , he was more than happy to rule in hell rather than serve in heaven. But things have changed. Now, he has faith, a new wife...and a ten-year-old half-breed son. Infamous madam Delilah Goodnight wants to take it all away from him. How can he protect his kingdom and his loved ones from her schemes without falling back on his past? How does he fight evil if not with evil?

Logan Tillane carries a Bible in his hand, wears a gun on his hip, and fights for lost souls any way he can. Newly arrived in , he has trouble, though, telling saints from sinners. The challenge only worsens when Delilah flings open the doors to the scandalous Crystal Chandelier. She and the new preacher have opposite plans for the town. One wants to save it, one wants to lead it straight to hell.

For Tillane and McIntyre, finding redemption was a long, hard road. God's grace has washed away their sins, but the consequences remain and God will not be mocked. For whatsoever a man soweth, that shall he also reap...and the harvest is finally at hand.

Where did you grow up and attend school? Are there any other authors in your family?
I was born in but moved to the mountains of when I was 9, and that was when I truly came home. My hometown is a tiny community (there were 26 seniors in my graduating class) and I miss it every day. I live in now. I’m convinced my 12-year-old will be a writer one day, he has such an incredible imagination, but he hates reading. Breaks his mother’s heart.


How did you get started writing? How old were you? What made you want to start? What did you enjoy reading as a child?

I am loathe to admit I grew up in a century when, as a child, I only had three tv channels to watch. Yes. I know. The horror of it. Forced from shear boredom to find other activities, I gravitated to writing. There used to be a cartoon called The Funky Phantom. I adored it and wrote my first story as a way to spend the afternoon with my favorite teenagers! My mom typed it up for me. I am still mad about some of her editorial changes, but we have finally agreed to disagree … 45 years later!


How and when did you and your husband meet? Was it love at first sight? What does he think about your being an author?

How apropos is it that my husband and I met at The Saloon? I kid you not. Wearing a baby blue button-up, he was leaning over a pool table, muscles in his shoulders bulging all sexy-like, and I said, “I like him.” But we didn’t make eye contact. A few minutes later he came up and asked if my friend and I would like to play pool. He told us later that he had actually lost the game he was playing and therefore the table as well. He gave the other guy twenty bucks to scram so he could invite me to play. He was not a big fan of my writing “hobby” until I finally hit the best-sellers list at Amazon. Now he’s a whole lot more enthusiastic.


How do you research the communities and people you write about? Do you find yourself having to do a lot of research?

I have travelled throughout the West, but especially and . I love those two states. That’s one reason I set my stories there. I’ve hiked to the top of Rock; rode horses in the mountains above Telluride; even held an outlaw’s note in my hands. I’ve worked as a journalist, too, and know how to research. Besides the Library of Congress, one of my favorite places to visit is the newspaper archives http://newspapers.wyo.gov/). Everything you could ever want to read about the Old West is in there! I read lots of old diaries and letters, too. I highly recommend the collection called Covered Wagon Women, the diaries and letters of women who went west on the and trails. And to my family’s dismay, I never pass up a museum when we’re on a roadtrip.

Which is your favorite book? Do you have a character in your books you identify with the most

Hearts in Defiance is my favorite book. It’s book 2 in the Romance in the series and I love it because God presented me with so many wonderful plot twists! It was such fun to write. And while there is a little bit of my sisters and me in all three of the fictional sisters, Naomi is my gal. Like me, she is a work in progress. Flawed, but lovable, God shows her a lot of grace. 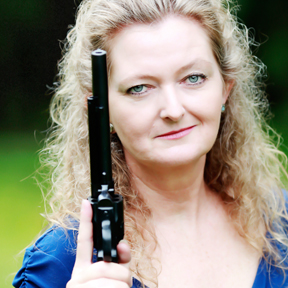 Heather Blanton is the independent bestselling author of several Christian Westerns, including the Romance in the series, which has sold over 40,000 copies. Intrigued by the concept of three good sisters stranded in a lawless mining town, a few notable producers have requested the script for her first book in that series, A Lady in Defiance. Heather’s writing is gritty and realistic. In fact, her books have been compared to AMC’s Hell on Wheels series, as well as the legendary Francine Rivers book, Redeeming Love.

A former journalist, Heather is an avid researcher and skillfully weaves truth in among the fictional story lines. She loves exploring the American West, especially ghost towns and museums. She has walked parts of the Oregon Trail, ridden horses through the , climbed to the top of Independence Rock, and even held an outlaw's note in her hand.

She writes Westerns because she grew up on a steady diet of Bonanza, Gunsmoke, and John Wayne movies. Her most fond childhood memory is of sitting next to her father, munching on popcorn, and watching Lucas McCain unload that !

She can be reached several different ways:

What a great author! I loved the first book in the series and can't wait to continue. bree.the.bibliophile.reviews@gmail.com

Awesome interview. Thanks for featuring Heather!

I learned quite a bit that I am surprised about! From your writing, I fully expected that you(Heather) were raised in the mountains. Thank you for letting us get to know her better! Absolutely in LOVE with Defiance!!

This is such a great interview. I learned many things about you, Heather, that I didn't know. The story of your husband paying the guy 20 bucks to keep the pool table so he could meet you is priceless! I also didn't know your favorite book you've written was Hearts in Defiance. I absolutely adore all your books, but that book is something extra specia!

Fun interview & fun picture of Heather holding that pistol...she looks like she means business...lol!!
Thanks for the giveaway!

Interesting interview and to learn about a new author. No one should cross Heather with that pistol in her hand.

Great interview. Thanks Laura and Heather!

Lovely interview and the book sounds great. Thanks for sharing. Yes, and we thought we were really living with those three channels.

Love the book cover. Book sounds like a good read. Congrats on the interview. annieban53@gmail.com

Y'all, thank you so very much for commenting. I would love to comment back, but I'm out of town in a place where internet connections are a pleasant surprise when they work! Hence, it's been iffy so far today and for whatever reason I can't respond to the individual comments. :( I'm so sorry, but again, thank you for letting me hear from you. I've enjoyed it so much!

A blessing to win a copy of A Promise in Defiance. Thank you! God bless.