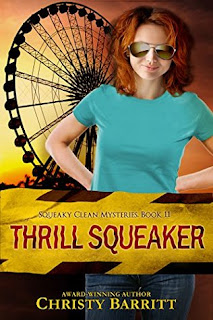 An abandoned theme park. An unsolved murder. A decision that will change Gabby’s life forever.

Restoring an old amusement park and turning it into a destination resort seems like a fun idea for former crime-scene cleaner Gabby St. Claire. The side job gives her the chance to spend time with her friends, something she’s missed since beginning a new career.

The job turns out to be more than Gabby bargained for when she finds a dead body on her first day. Add to the mix legends of Bigfoot, creepy clowns, and ghost-like remnants of happier times at the park, and her stay begins to feel like a rollercoaster ride.

Someone doesn’t want the decrepit Mythical Falls to open again, but just how far is this person willing to go to ensure this venture fails? As the stakes rise and danger creeps closer, will Gabby be able to restore things in her own life that time has destroyed—including broken relationships? Or is her future closer to the fate of the doomed Mythical Falls?

My thoughts: THRILL SQUEAKER is the 11th book in Ms. Barritt's popular series Squeaky Clean Mysteries. While the relationship between Gabby and Riley move along and changes, each book is stand alone on the mysteries, and this spooky, scary book is a great one to jump in at.

Summer vacation and theme parks are at the top of a lot of family's vacation lists. This particular park has been closed down due to three unexplained murders--one of them by Big Foot who supposedly lives in the woods there. When Gabby and her co worker go to help clean up the park so the new owner can open it up in time for tourist season, the first thing they find is another body -- killed by Big Foot!

Despite misgivings, Gabby and Cade move into the cabins on the property and then Gabby wakes to find a Big Foot footprint outside her bedroom window. Commercials of the park play without warning in buildings where the electric is off. Men go missing. Another attempted strangling by Big Foot. Multiple footprints... and so much more. This is a book NOT to read after dark unless you aren't bothered by things that go bump in the night. Super scary.  Fans of Christy Barritt will not want to miss THRILL SQUEAKER.  Recommended.
at July 29, 2016