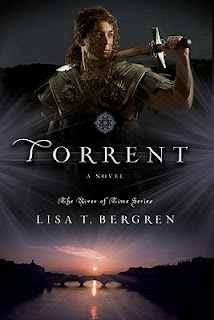 When Gabi and Lia finally learn to surf the river of time, they realize they must make hard choices about life and love in Torrent, the third and final book in the River of Time series.
Gabi and Lia Betarrini have learned to control their time travel, and they return from medieval Italy to save their father from his tragic death in modern times.
But love calls across the centuries, and the girls are determined to return forever—even though they know the Black Plague is advancing across Europe, claiming the lives of one-third of the population. In the suspenseful conclusion of the River of Time series, every decision is about life … and death.

From the Back Cover

“Hold tight,” I said. “No matter what happens, do not let us go.”
“We won’t,” my dad said.
“Never,” Mom added.
And with a look at Lia, we laid our hands upon the prints.
Gabriella and Evangelia Betarrini are just two normal American teenagers. Normal except for the fact that they time travel to fourteenth-century Italy, where they’ve lived in castles they’ve seen as crumbling ruins, become swept up in historic battles, and fallen in love with handsome knights willing to do anything to keep them alive.

They’ve returned to the present to save their father, just short of his tragic death, and now all four return to the place that holds the girls’ hearts, medieval Italy. But remaining there means facing great risk as the battle for territory wages on and the coming Black Plague looms.

Can they convince their parents to stay and leave behind everything they’ve worked so hard to accomplish? And will the girls sacrifice their futures in an uncertain past? Or in facing death head-on, will they discover life as it was always meant to be lived?

Lisa T. Bergren is the best-selling, award-winning author of more than thirty books that have sold 1.5+ million copies. A former publishing executive, she now splits her time writing, editing, and dreaming of her next trip to Italy while parenting her three children with her husband, Tim. They live in Colorado Springs, Colorado.
at August 13, 2016