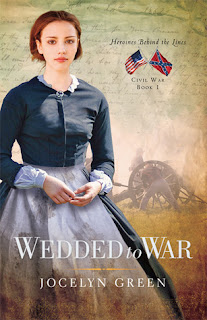 Heroines Behind the Lines #1


When war erupted, she gave up a life of privilege for a life of significance.

It's April 1861, and the Union Army's Medical Department is a disaster, completely unprepared for the magnitude of war. A small group of New York City women, including 28-year-old Charlotte Waverly, decide to do something about it, and end up changing the course of the war, despite criticism, ridicule and social ostracism. Charlotte leaves a life of privilege, wealth-and confining expectations-to be one of the first female nurses for the Union Army. She quickly discovers that she's fighting more than just the Rebellion by working in the hospitals. Corruption, harassment, and opposition from Northern doctors threaten to push her out of her new role. At the same time, her sweetheart disapproves of her shocking strength and independence, forcing her to make an impossible decision: Will she choose love and marriage, or duty to a cause that seems to be losing? An Irish immigrant named Ruby O'Flannery, who turns to the unthinkable in the face of starvation, holds the secret that will unlock the door to Charlotte's future. But will the rich and poor confide in each other in time?
Wedded to War is a work of fiction, but the story is inspired by the true life of Civil War nurse Georgeanna Woolsey. Woolsey's letters and journals, written over 150 years ago, offer a thorough look of what pioneering nurses endured.
Jocelyn Green's debut novel is endorsed by historians and professors for its historical accuracy and detail, by award-winning novelists for its spell-binding storytelling, and by entertainment journalists and book club leaders for its deep and complex content, perfect to share and discuss with others.

My thoughts: WEDDED TO WAR is inspired by the true story of a Civil War nurse. While fictionalized it contains some of Ms. Woolsey's letters and journal entries as well as  notes by the author.

WEDDED TO WAR is written in parts, before the nursing call, during the nursing call, after, etc. There really is no promise of a happy ever after as most romance readers like, but this is woman's fiction and not a romance, though Charlotte is involved in relationships with men in various parts of the book. I loved Caleb, and hoped they would form a relationship beyond what they had. But again, this isn't a romance.

If you love history, the history of nursing, women's rights history, or historicals based on real life stories, then WEDDED TO WAR is a book to consider. While long (over 400 pages) it is easy reading and kept me engaged throughout the book.  5 stars.
at August 20, 2016

I so appreciate that you (Like me) go back to read and review books other than those newly released.

You've definitely triggered an interest in me for this story.

Thanks for posting this review, Laura

I appreciate your thoughtful review, too, Laura! Thanks so much. I'm glad to hear you loved Caleb--he makes a quick appearance in Widow of Gettysburg (so does Charlotte), and plays a role in Spy of Richmond, too. Some readers want a novella showcasing more of Caleb and Charlotte's relationship--we'll see about that once my other deadlines are met! :)

Your review makes me want to read Wedded to War. Reading books set during the Civil War era is one of my favorite for historical Christian fiction.

You will LOVE this book.

Jocelyn, I would love to read that novella too, if you ever do write it! I understand deadlines!