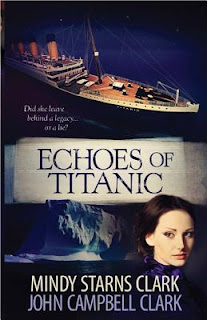 Kelsey Tate comes from sturdy stock. Her great-grandmother Adele endured the sinking of Titanic and made it safely to America, where she not only survived but thrived. Generations later, Kelsey works for the firm Adele founded nearly 100 years ago.
Now facing a hostile takeover, the firm's origins are challenged when new facts emerge about Adele's actions on the night Titanic sank. Kelsey tries to defend the company and the great-grandmother she has long admired, but the stakes are raised when Kelsey's boss is murdered and her own life threatened.

Forced to seek help from Cole Thornton, a man Kelsey once loved—and lost, thanks to her success-at-all-costs mentality—she pursues mysteries both past and present. Aided by Cole and strengthened by the faith she'd all but forgotten in her climb up the corporate ladder, Kelsey races the clock to defend her family legacy, her livelihood, and ultimately her life.

My thoughts: ECHOES OF TITANIC is a book written during the height of the Titanic anniversary, so I'm a bit behind reading it.  It is part historical with Adele and Jocelyn's stories written, and partially contemporary with their heir trying to manage the business.

When Kelsey's great-grandmother's identity is questioned, things go into an uproar.  Why is a man surfacing NOW to state his claim on half of the business's assets?  Why did Kelsey's boss commit suicide -- or was it murder?  Who really survived the Titanic's sinking?  Adele or Jocelyn? And who is threatening kelsey's life?

My big issue with this book is the company is founded by a Titanic survivor - and was it Jocelyn or Adele.  This is NOT a spoiler. Kelsey claims to be related to the survivor - obviously she is because neither woman was married or had children.  So I don't see why it was built up that her relationship is all lies. But it was an interesting read.

I love Ms. Clark's books and this one was no exception. I had to find out what happens and stayed up until the wee hours of the morning to see.  If you like mystery then pick up ECHOES OF TITANIC and read it for yourself. Great book.

Mindy Starns Clark is the bestselling author of more than 20 books, both fiction and nonfiction, with over a million copies sold. Mindy and her husband, John, have two adult children and live in Pennsylvania. www.mindystarnsclark.com

John Campbell Clark is an attorney and CPA who works in the Christian nonprofit field. Married to Mindy Starns Clark, he has served as her brainstorming partner, research facilitator, and first reader for many years. A lifelong Titanic buff, he is pleased to be coauthoring with her now. John and Mindy live with their two daughters near Valley Forge, Pennsylvania.
at August 07, 2016