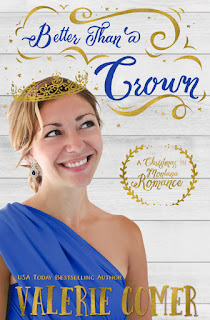 Today we welcome Valerie Comer to my blog. Val, Tell us about your new book – a brief blurb:

Always a princess, never the queen.

As a runner-up in 27 competitions, Heather Francis tries to teach young contestants there’s more to pageants than winning, even though her mother never got that memo. It’s hard enough to focus and ignore the inner voice calling her a fraud without being attracted to Grizzly Gulch Resort’s brooding temporary chef.
Levi Esteban’s temp job as chef in Helena, Montana, and caregiver for his niece, Shelby, would be perfect if it weren’t for the Miss Snowflake Christmas festivities at the resort. Levi’s been against pageantry all his life and isn’t about to change his stance, regardless of his fascination with Shelby’s coach.

When Shelby’s parents’ trip is extended, Levi and Heather must join forces to care for her and pull off the pageant. Is there something better than a crown in their future?

Are any experiences in Better Than a Crown based on personal experiences? Did you draw upon any stories or movies for inspiration for the novel?

The only thing that came from my own life is the feeling of being a fraud. I think we all feel that way at times — I’m not sure I want to know if Heather and I are the only ones! Other than that character trait, this story came completely from my imagination. I’ve never entered a beauty pageant or coached contestants. I’ve never adopted from China. I’ve never been an award-winning chef. Most of the inspiration came from the situations set up in the previous two books in the series.

If you had to do it all over again, would you change anything in Better Than a Crown?

I can’t think of anything, but if I could redo Other Than a Halo, the previous book in the series, I’d bring Heather, the new heroine, into the story a bit more. I didn’t give myself much to go on.

The hardest part was coming up with the story idea, which is unusual for me. Like I said, I didn’t have much of an idea for Better Than a Crown while I was writing Other Than a Halo. I had some concepts I needed to include: Heather was a pageantry coach, and the story was set at Grizzly Gulch Resort in Helena, Montana, with the Miss Snowflake Pageant as a backdrop. It was a Christmas story, and there needed to be children. But whom to pair Heather with and what their conflicts might be took longer to solidify. I’m delighted with the story God dropped into my lap!

I’m a pantser, which is a seat-of-the-pants writer. This means I start writing with only a vague story idea. I know, I know… I’d much rather have an outline in some ways, but that’s not what works for my brain. What I learned (again) during the writing of Better Than a Crown was how much I need to depend on God for my daily inspiration. “I” might not have known where the story was going, but He did.

Did you have to travel much for research for Better Than a Crown?

My husband and I spent a couple of days in Helena, Montana, a couple of years ago before I wrote More Than a Tiara, the first book in the Christmas in Montana Romance series. I do like poking around the town where my stories are set to get a good feel for the setting!

What was it like coming back to the residents of Helena for the third novel in the series? Do you foresee any more stories for this family of characters?

Never say never! But Better Than a Crown is planned to be the final book set in Helena with pageantry themes. I do like to criss-cross my various series, though, so you never know when someone from Helena might show up somewhere else! Right now I don’t have any specific plans for that to happen.

Who was your favorite character in Better Than a Crown?

I really enjoyed writing Heather. Her parents had done a real number on her self-esteem with their focus on money and their definition of success. Watching her come to grips with her identity in Jesus was a thrilling experience for me.

Was there anything in Better Than a Crown that you did not enjoy writing about?

No, not really. If it seems a scene is necessary to the story, I treat it as a process. Whether I ‘enjoy’ a particular dialogue or twist isn’t relevant, so long as it serves the story! 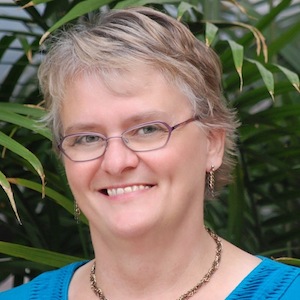 Valerie Comer’s life on a small farm in western Canada provides the seed for stories of contemporary Christian romance. Like many of her characters, Valerie grows much of her own food and is active in the local foods movement as well as her church. She only hopes her imaginary friends enjoy their happily-ever-afters as much as she does hers, shared with her husband, adult kids, and adorable granddaughters.


Thank you for the nice interview with Valerie Comer. It's always nice to learn how an author comes up with her plots and characters. Better Than a Crown sounds like a fun read. I loved visitng Helena, Montana when a great aunt and uncle lived there. I'm sure it's changed since I was there.