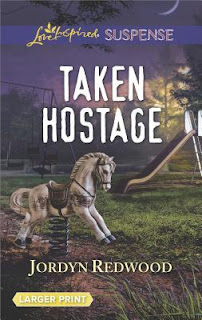 A DEADLY RANSOM
When neurosurgeon Regan Lockhart’s daughter is kidnapped, the abductors want to make a deal for the little girl’s life. If she wishes to ever see her child again, Regan must hand over the virus she uses in a radical cancer treatment. But bounty hunter Colby Waterson can’t let her trade the cure, which is his sister’s last hope. He’s already lost a wife and baby, and he won’t lose anyone else. But when a mistake leads both him and Regan into the hands of the bad guys, the kidnappers up their demands. Now Regan must create a biological weapon or her daughter dies. For Colby, no case has ever been this personal. He’ll need every skill he’s got, because only he can save both his sister and the woman he’s growing to care for.

My thoughts: TAKEN HOSTAGE is a rather scary suspense involving Bio-terrorism. Dr. Regan Lockhart has developed a vaccine that might cure certain kinds of cancer but she is  sucked into a scary nightmare when she is attacked on a busy commute to the hospital early one morning. Her daughter is kidnapped, her nanny is murdered, and terrorists are insisting she develop a virus that will kill mass amounts of people or she'll never see her daughter alive again.

No dead bodies are found by hero or heroine if you are the screamish sort, there is a bit of realism suspended with a bank scene, but otherwise I was at the edge of my seat. What would Regan do?  Will Colby be able to rescue her? Will she be able to save his sister's life? Will the terrorists win?

You'll have to read this page-turner to find out.