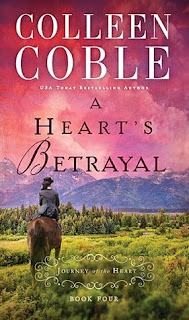 Emmie finds shelter in the arms of a soldier, but her secret could drive them apart.

When Emmie Croftner answered the door to her late husband’s home, she discovered an awful truth: her deceased husband was a bigamist. And what’s more, the home she thought she inherited never belonged to her at all.

Suddenly displaced, powerless, and ashamed, Emmie can’t stay in . She makes a hopeful start for , to find her friend Sarah Montgomery and a new beginning. But when she arrives, she discovers she’s pregnant—and without a husband. The new start she’d hoped for slips from her fingers.

But then she meets Isaac Liddle, a handsome soldier with a kind heart. When he begins to court her, Emmie wonders whether she could ever really be his—and whether she dares to tell him she is carrying another man’s baby.

A HEART’S BETRAYAL is the fourth book in Ms. Coble’s serial series Journey of the Heart. This story is actually the beginning of a new book, so it would stand alone, separate from the first three in the series. But this is intended to be read immediately following the first three A Heart’s Obsession, A Heart’s Danger, and A Heart’s Promise. The two books these stories (Where Leads the Heart and Plains of Promise) were pulled from were previously published with Heartsong Presents, but have been out of print for over ten years.

Fans of historical fiction will want to read these books. There is a hint of suspense, but not so much as her current books. The romance is light and sweet. There isn’t as much meat or substance and her characters aren’t as well developed in these books as there are in her more recent books.

I am a huge fan of Ms. Coble’s contemporary romantic suspense, but these, not so much. Still some might enjoy them… but that said they are a serial. Only one-third of a book or one-sixth of a book (depending on how you look at it) for $6.99 a section (in print). By the time you bought three, you’d be paying close to $21.00. Rather pricy for a romance… If you bought all six, it would be almost $42.00.

I obtained this book from the publisher, via Litfuse, in exchange for a review.