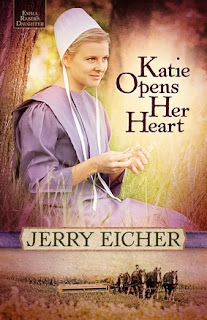 Bestselling Amish fiction author Jerry S. Eicher (nearly half a million copies sold) returns with the first book in another of his delightful and compelling series.

Here is the touching story of an awakening young Amish girl, Katie Raber, who finds she wants more from life than to be known as simply "Emma Raber's daughter."

Emma has refused to remarry since Katie's daett died soon after she was born. And in an effort to keep Katie home, Emma has forbidden her from participating in the rumspringa tradition.

When widower Jesse Mast calls for Mamm's hand in marriage, Katie hopes to move into a new phase of life and leave the old "Emma Raber's daughter" behind. But Emma is having none of it, and Katie must consider abandoning all hope of ever changing her mamm's bitterness or of ever having popular Ben Yoder notice her. Out of sheer frustration, she begins attending nearby Mennonite youth gatherings.

fly when Jesse's children object fiercely to the attentions their daett is paying to Emma Raber. And widowed Ruth Hochstetler makes her own move for Jesse Mast's hand.

KATIE OPENS HER HEART is the first book in this series by Jerry S. Eicher. I thought it would be a romance for Katie, but it was a romance for her mother. I didn’t really care for this book. I didn’t like Katie, or her mother, and the characters were flat and one-dimensional. I couldn’t relate at all. The pace was very slow…

There are several points of views in the book, Katie’s, and her mother’s and Jesse’s and Ruth’s… I couldn’t believe Ruth was doing exactly what she accused Emma of doing.

Katie was just a bystander in this book and distressed her mother greatly by going out with friends… Emma wanted her to stay home and never having friends or love. So Emma was unhappy when Katie started going out.

Not Jerry Eicher’s best work. But still, his fans might want to read it.

I obtained this book from the publisher in exchange for my honest review.
at June 11, 2015