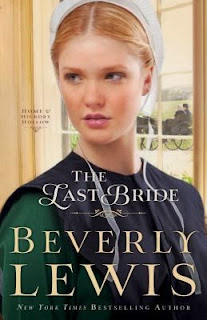 Of her Old Order parents' five daughters, Tessie Miller is the last to marry. She has her heart set on Amishman Marcus King, but Tessie's father opposes the match.

Impetuously, Tessie and Marcus elope to the English world, then return to Hickory Hollow to live as singles, trusting they'll convince the Millers to give their love a chance over time. But when the unthinkable happens, Tessie faces the almost-certain censure of the People. Will she find a reason for hope in spite of her desperate plight?

THE LAST BRIDESMAID is one of the books in Ms. Lewis’ Home to Hickory Hollow series. This book had a good premise, but unfortunately it wasn’t delivered. The characters were flat and one dimensional, the choices made by some of the characters were unbelievable, and the romance between Levi and Tessie Ann was just plain dead. No sparks. I have to admit I liked his stance. I thought maybe I would shed some tears in this book when I predicted (correctly) where the story would go, but no. Even those scenes were flat.

Ms. Lewis has been a favorite author of many (including me) for a long time. This book, for me, fell totally flat but I wanted to like it. I did smile though, I wrote about the Amish man swaps in my books, The Amish of Seymour series and took flack for it—people saying they don’t exist. I researched it prior to writing. They do. More than you know. And Her Royal Highness, the Queen of Amish fiction, mentioned them in this book (no one gave her flack.) If you are looking for new Amish authors to read, may I suggest some of my favorite Amish authors, Suzanne Woods Fisher, Cindy Woodsmall, Ruth Reid, Tricia Goyer, and a few others--including myself.

I obtained this book from the publisher in exchange for my honest review.
at June 08, 2015