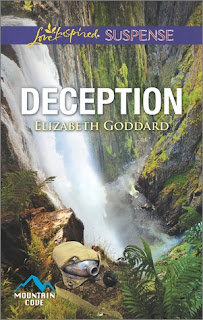 
TRAIL OF SECRETS
Jewel Caraway thought she'd left her mistakes in the past—but then her past arrives at her door. Though she's thrilled to reunite with her estranged sister, something about her sister's new husband makes Jewel uneasy. Does he know her secret? Is he the one behind the growing list of attacks against her? And if he is involved…does that mean her sister is, too? With nowhere else to turn, Jewel must rely on police chief Colin Winters—the first man to make the widow question her resolve to never love again. But will he stay by her side when her guarded secrets are revealed?
Mountain Cove: In the Alaskan wilderness, love and danger collide

My thoughts: DECEPTION is Ms. Goddard's newest suspense, and it is edge of your seat fiction for sure. Someone is trying to kill Jewel, but why and who? The trouble always seems to start when her sister and her new husband arrived on vacation. Jewel is happy to see her sister, since the family was estranged, but she is a bit uncomfortable with her sister's new man.

Jewel is a bit older than the average characters in Love Inspired Suspense, since she's in her mid-to-late forties and Colin is in his fifties. It was nice reading a story about a middle-age couple who've loved and lost. That was a surprise since the average age in most LIS are late twenties to mid-thirties.

The :who-dun-it and why are fairly obvious in this story, but when a female turned out to be assisting, the suspense level went up. Who is helping? How did they discover Jewel's carefully kept secret? I had to keep reading to find out that part of the suspense and how the "bad guys" were caught.