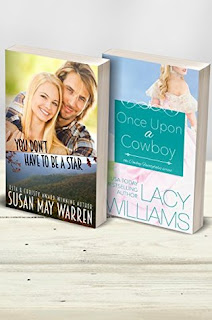 You Don't Have to Be a Star / Once Upon a Cowboy (2-in-1): inspirational romance

You Don’t Have to Be a Star by Susan May Warren
A Prequel to the Montana Fire Series
Former Green Beret Luke Alexander just wants to forget his past and mind his own business in the woods of east Tennessee. And his park ranger job seems just the solution… until a diva movie star walks into his world looking for someplace to hide. But the Cherokee forest isn’t big enough for the both of them, not if you include the trouble MacKenzie has dragged along behind her. And soon she’s stirring up his own murky past—one out for revenge. Which trouble will find them first? Is it even possible to outrun your past and start over? Luke and MacKenzie are about to find out…

My thoughts: YOU DON'T HAVE TO BE A STAR is Ms. Warren's trademark fiction, a little suspense, a lot of romance, and a whole lot of realism in the characters.

At first I didn't think I'd have anything to do with the diva Kenzie. But then she turned out to be a whole lot more normal than first impression allows. Luke likewise, hiding behind his grizzly gruff park ranger demeanor and living totally off the grid because he doesn't want to be found. When Kenzie shows up to borrow his "vacation home" for a "brief" stay he is totally unprepared. He didn't even know she was coming!

It didn't take long for Luke to win my heart. He is a dear. It did take a bit longer for Kenzie, but when she shed her diva shell she became much more relate-able and I started to care.

I love Ms. Warren's books and devoured this one once I sat down to read it. Cannot wait to start the smoke-jumper series coming soon. YOU DON'T HAVE TO BE A STAR is highly recommended. 4.5 stars.
Once Upon a Cowboy by Lacy Williams
Book 1 in the Cowboy Fairytales series
A princess on-the-run finds sanctuary where she least expects it…
After nearly dying in an assassination attempt, Princess Alessandra of Glorvaird escapes to a place no one would ever think to look for her: small town Oklahoma and a ranch staffed by a herd of wooly, uncouth cowboys. One cowboy in particular gets under her skin, until she sees his softer side. She knows this interlude can’t last forever, but that doesn’t stop her from wishing it might…
Former Navy SEAL Gideon Hale might’ve rescued the princess from freezing to death, but the soldier doesn’t trust easily—or at all—especially when his gut tells him Alessandra is keeping secrets. But as Alessandra begins to fit into his life, he discovers another side to the princess—one that he can’t help but like.
When Alessandra’s enemies close in, Gideon must fight to save the woman who has become so much more than a princess…
Once Upon a Cowboy is a contemporary western retelling of the Snow White fairytale and Book 1 in the Cowboy Fairytales series.

My thoughts; ONCE UPON A COWBOY is the first book I've read by Ms. Williams. Based on the fairy tale Snow White it is a modern day princess and a grizzly bear of a rancher. Rough, crude, and obnoxious. Alessandra is unlike any  princess I've ever imagined, perfectly at home in a bachelor pad of a ranch house, taking over maid duties and cooking duties, while Gideon spends his time helping cows in trouble and knocking Alessandra into walls every time he feels she's in danger. I didn't grow to care for any of these characters, and I "closed the book" with a "Meh." It is cleanly written. Just not my style of story. 3 stars.