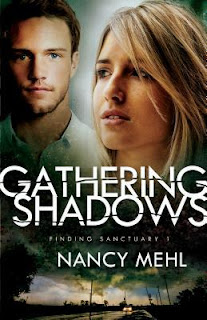 Wynter Evans is a promising young reporter for a television station in St. Louis, but even a bright future doesn't take away her pain over the disappearance of her brother nine years ago. So when she stumbles across a photograph of a boy with an eerie resemblance to him, she can't pass up the chance to track him down. With research for work as her cover, she sets out with one of the station's photogs for the place where the picture was taken: the town of Sanctuary.
Almost as soon as she arrives, she meets the town's handsome young mayor, Rueben King, and together they begin to uncover long held secrets that could tear the small town apart and change everything Wynter thought she knew about her life. As the truth of her family's past hides in the shadows, it's clear someone will stop at nothing to keep the answers she's searching for hidden forever--even if the cost is Wynter's very life.

My thoughts:  GATHERING SHADOWS is the first book in the Finding Sanctuary series which I unintentionally read out of order.  The other two books are: Deadly Echoes and Rising Darkness.  The books do stand alone, but fans will likely want to read them in order as there are some continuing characters.

I enjoyed getting to know Wynter and Reuben. Zac and the older lady, Esther, they were staying with made for great secondary characters. I really fell in love with Zac.  Even though I knew the formula for romantic suspense and knew the obvious suspect wasn't it,  I was surprised when the real villain was revealed--although I did have some inklings close to the end.  I hoped Wynter would find her brother, and that her family would work out all their problems.

Fans of romantic suspense, and those who love plain fiction (though this book is not Amish, it is Mennonite) will devour this series. Ms. Mehl is a very talented romantic suspense author and I've read almost all her books (though obviously I have to go back and get some I missed earlier.