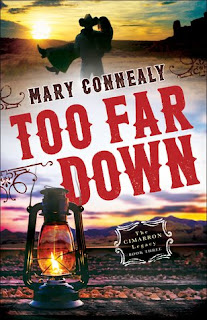 When an explosion kills men and damages the CR Mining Company, the Bodens realize their troubles are not behind them as they thought. Shadowy forces are still working against them.
Cole Boden finds himself caught between missing his time back East and all that New Mexico offers. Sure he fights with his siblings now and then, but he does care for them. He enjoys running the mine and, when he's honest, he admits that Melanie Blake captures his interest in a way no other woman ever has.
Melanie has been a friend to the Bodens forever. A cowgirl who is more comfortable with horses and lassoes than people, she never expected to find herself falling for someone. Particularly for refined Cole Boden, a Harvard graduate who may not stay long at the ranch. She's determined, however, to help the Bodens finally put an end to the danger that's threatened all of them. But will putting herself in harm's way be more dangerous than anyone expected?

My thoughts: TOO FAR DOWN is the third book in Ms. Connealy's  The Cimarron Legacy. This book does stand alone, but to keep up with the family history and their trials and tribulations and romances fans will want to read No Way Up and Long Time Gone to find out the rest of the story.

TOO FAR DOWN starts out with a literal explosion--classic Mary Connealy--blasting the readers into the action immediately on page one. And it doesn't let up. In fact it seems iffy that the hero will even survive the first chapter with dynamite going off here, there and everywhere and the mountain literally raining down on their heads.

Who is behind the attack, and is it as Cole and his family fears, that someone wants the ranch, wants the gold mines, and somehow knows the terms of the patriarch's will?  Who?

This is a historical, a western, a romance, and a suspense all rolled into one. Fans of any and all of these genres will love TOO FAR DOWN. Plus Ms. Connealy add's lots of humor, guaranteed to get a laugh or more from the story.

For the screamish, there are some bodies. Lots of blood and gore. But nothing creepy or chilling or disturbing. This book might keep you up at night trying to figure out who-dun-it and why, but it won't give you nightmares.

Great review of Too Far Down.