Beauty to Die For 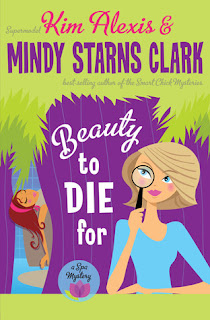 Juliette Taylor walked away from her career as a supermodel twenty-five years ago. Now approaching fifty – an emotionally complex milestone -- she co-owns a beauty supply company that makes skincare products for salons and spas. Her niche is pampering Christian women who usually spend more time caring for others than for themselves under the slogan:

Isn’t it time someone took care of YOU for a change?

When Juliette arrives at the Palm Grotto Spa to host a spiritual retreat, she runs into an old modeling colleague, Raven, who had always been disliked in the industry for many reasons. She isn’t there for the retreat; in fact, her presence at the spa is somewhat mysterious.

Not long after Raven makes a cryptic threat to Juliette, the unsympathetic back-then beauty is found dead, poisoned by something in the green clay of a chai soy wrap. The following morning, a banner for the retreat has been unceremoniously altered:

It’s your turn to be nurtured, to be restored . . . to be murdered.

Suspicion is directed at Juliette who has history with Raven and certainly knows how to use beauty products. But for murder?! Now she must find the real killer before the police really take care of her.

BEAUTY TO DIE FOR starts slow and doesn’t really pick up until toward the end of the book. It also seemed a bit over-long. There is a lot of spa information in there that I didn’t know (having never been to one) and I learned a lot. It was funny with the police trying to figure out which refrigerator was for what. I also liked . She was naïve, (and a bit predictable) but she was real where Juliette seemed to keep an too-perfect façade at all times—unless she was hiding from Raven or some other stress-inducer (that made her seem weak, though I totally get why she would).

I liked that the characters had a favorite candy and jokes to go along with it and that Marcus and Juliette reconnected after so long. I also liked the faith message to keep Christ at the center of our lives. Marcus’ mom was great. I fell in love with her.

If you enjoy cozy mysteries you might enjoy this book.

I am a long time fan of Mindy Starns Clark and this book did not have the same feel or voice as her other books. I think Kim Alexis' voice took control in this venture. Not my favorite Mindy Starns Clark book.
3.5 stars. Available in ebook, hardcover, and paperback. 352  pages.

I obtained this book from Wynn-Wynn Media in exchange for my honest review.
at August 13, 2015