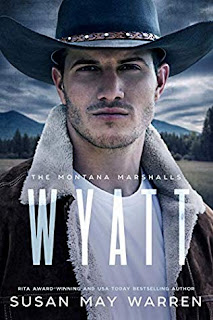 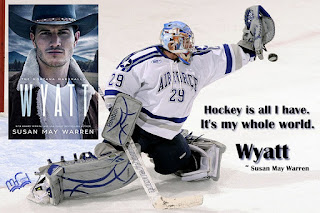 He’s lost her twice…he’s not going to lose her again...

NHL Hockey Goalie Wyatt Marshall has everything--fame, money and a thriving career. But he’s hiding the two things that matter most...a career-ending injury, and his broken heart. He’s been in love with Coco Stanley since she walked into his life at age fourteen, a foster child for the Marshall family. She stole his heart years later, when, after a secret tryst, she returned to her home country of Russia. But she won’t let him back into her life—and he can’t figure out why.
She’s harboring a secret that could cost lives...
Coco Stanley is tired of living her life undercover. Or at least, with an assumed name, always pretending to be someone she’s not. And that’s not the only secret she’s harboring. If Wyatt discovers the real reason she left him, it might just destroy him. She’s resigned herself to loving him from afar...
But when he discovers she’s in danger...
Wyatt is horrified when he learns Coco has been shot and left in Russia, her fate unknown. There is nothing—nothing—that will stop him from finding her. So what if he’s not one of his super-heroic brothers, not a Ranger, not a SEAL...Wyatt is a hockey goalie, a special kind of crazy brave. Except, is he brave enough to face the secret Coco is keeping, or will it destroy everything he’s hoped for?
What will it cost them to save her?
What Wyatt and Coco don’t know is that revenge is stalking her and bringing her home just might cost them their long-awaited happy ending.
Continue the breath-taking Montana Marshalls series! 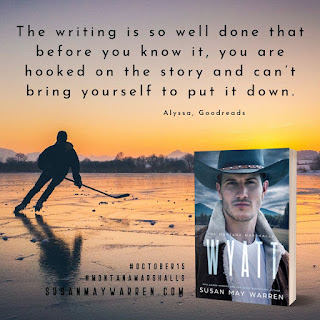 My thoughts:  WYATT is the fourth book in the Montana Marshalls series  and readers  will want to read them in order... Knox, Tate, Ford and WYATT as this series does not stand alone. There is an ongoing suspense tying all the books together. 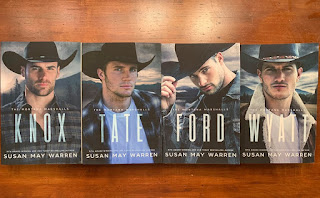 I  absolutely loved the faith message in WYATT, one both he  and Coco have to embrace and I love  Wyatt's mom and the way she's so... matter of fact. That is all I can  say without giving away spoilers. :)

The Marshall  Family is larger than life - in a word, epic - and none of the siblings are cowards - they are all crazy brave and rush in where angels fear to tread.  The boys are also well-versed fist  fighters.  For more conservative readers there is violence and some beer drinking.

I can't wait to read Ruby Jane coming next month for the sure-to-be exciting conclusion to the Montana Marshall series.

Readers will want to read WYATT with a box of tissues close by (if they cry easily.)  Parts are really sad, some parts upsetting, and others totally sweet.  And fans of York (from Ford) will rejoice as York is once again  a key player in WYATT.

Grab your copy of WYATT today.

I was given a  copy free. All opinions are my own. 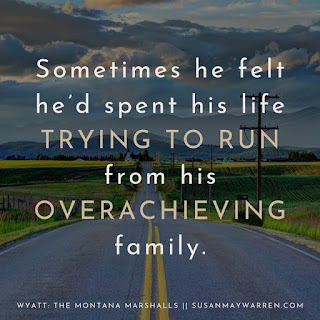 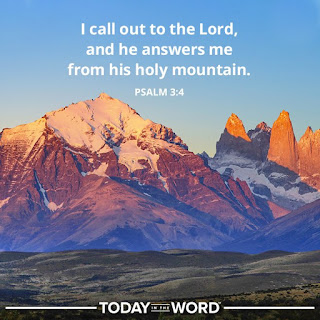