Cottonmouth and the End 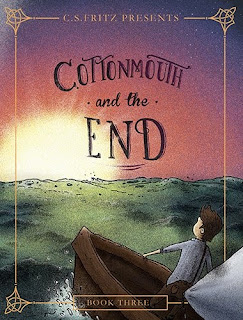 Join Frederick Cottonmouth as he steps out of our world and into another in order to complete his mission. In this dramatic conclusion to young Freddie's story, he will face great challenges and conflicts. How will Freddie react when he comes face-to-face with true darkness?Parents and their children will savor this creative story that has the artistic sense of Where the Wild Things Are, the heart of Narnia, and the redemptive themes of sacrifice and friendship.

My thoughts: COTTONMOUTH AND THE END is book 3 in this collection. I didn't read the first two books Cottonmouth and the River and Cottonmouth and the Great Gift, but this story stood alone. I thought, initially, this book was rather scary, it was white print on black pages, and really, it was kind of spooky. But then it lightened up and I realized the man message of this book -- and that really it is the all too real situation of the power of darkness versus the power of light. I love the message in this book. Really really good. I recommend this to those who love spiritual warfare stories. The Christian message is clear to those who understand it but veiled enough that it could be placed in more secular places (public schools/libraries). The artwork is nothing short of amazing. Highly recommended.

Casey “C. S.” Fritz is both master artist and writer, creating story with words and illustrations. In 2011, he was nominated as Arizona Visual Artist of the Year. He is now director of Kids & Youth Ministry for Reality LA. He lives in Hollywood with his wife and two young children.
at May 30, 2015