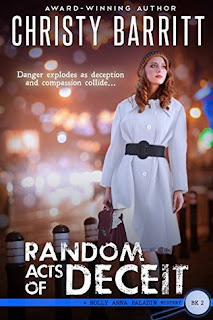 
“Break up with Chase Dexter, or I’ll kill him.”

Holly Anna Paladin never expected such a gut-wrenching ultimatum. But the man threatening her makes it clear he’s dead serious. With home invasions, hidden cameras, and bombs threats, Holly must make some serious choices. Whatever Holly decides, the consequences will either break her heart or break her soul. She tries to match wits with the masked man, but he’s always a step ahead of her. The more she fights, the deeper she’s drawn into the perilous situation. Dealing with the ultimatum, her sister’s wedding problems, and riots that have broken out in the city, Holly’s nearly at her breaking point. She must discover the identity of this mystery man before someone she loves dies. But the deceit is threatening to pull her under . . . six feet under.

My thoughts:  RANDOM ACTS OF DECEIT is the second book in the Holly Anna Paladin Mysteries series, but it easily stands alone. I read Random Acts of Murder first though just in case. That does show how Chase and Holly meet and fall in love, and has it's own mystery. I can't wait for the third book coming later this year.

Written in first person, the reader is in Holly's point of view the whole time. I liked her best friend, Jamie, a lot better in this book. She was a lot nicer and not nearly so quick to jump to conclusions and storm off. I also appreciated that she thought of things that Holly never thought of.

I thoroughly enjoyed this book. If you enjoy cozy mysteries, you will love Christy Barritt's books.  She's one of my favorite cozy mystery writers. Recommended.