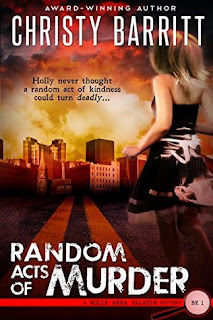 
When Holly Anna Paladin is given a year to live, she embraces her final days doing what she loves most—random acts of kindness. But one of her extreme good deeds goes horribly wrong, implicating Holly in a string of murders. Holly is suddenly in a different kind of fight for her life.

Only two other people know Holly was at the site of the murder, and one of them is the killer. Making matters stickier is the fact that the detective assigned to the case is her old high school crush and present day nemesis.

The clock is ticking as Holly is forced to play a dangerous game. Will Holly find the killer before he ruins what’s left of her life? Or will she spend her final days alone and behind bars?

My thoughts: RANDOM ACTS OF MURDER is the first book in Ms. Barritt's A Holly Anna Paladin Mystery series. I pulled book two, Random Acts of Deceit to read, when I realized I had this book on my kindle, so I decided to read them in order.

RANDOM ACTS OF MURDER is written in first person, so we're only in Holly's point of view. I enjoyed getting to know her, and Chase was a real sweetheart. I wasn't sure what I thought of Holly's best friend as she was nice one minute and storming off the next. I had my guess who the bad guy was, there are plenty of red herrings, but the guy I initially thought was the bad guy wasn't.

I have no complaints. I thoroughly enjoyed RANDOM ACTS OF MURDER and can't wait to read Random Acts of Deceit.  Highly recommended.

I was given this book by the author in exchange for an honest review.
at September 08, 2015