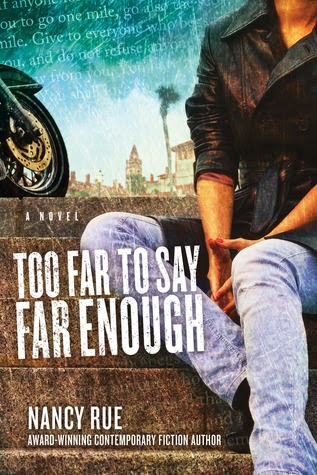 “Please, God! Show me what we’re doing here!”
Go another mile was the answer…

Allison Chamberlain has done everything God required of her—but as He continues to nudge her in the third and final book of The Reluctant Prophet series, she is ready to say, “Enough!”

In this gripping conclusion to The Reluctant Prophet trilogy, Allison Chamberlain confronts the darkness of society—both in the drug-infested neighborhood of West King Street, and within the menacing business empire of Chamberlain Enterprises. Allison must decide, Is the price of anger and hatred worth the cost of loving?

With most of her relationships in jeopardy, Allison finds surprising allies who convince her she—just like Harley riders who reach what seems to be the end of the road—has come too far to say far enough. But not before the lives of those most precious to her are threatened—and not before she discovers the true identity of the prophet within.

Nancy Rue is the author of more than one hundred books for adults and teens, including the Christy Award-winning The Reluctant Prophet, Unexpected Dismounts and Healing Waters (with Steve Arterburn), which was the 2009 Women of Faith Novel of the Year. She travels extensively—at times on the back of a Harley—speaking to and teaching groups of women of all ages. Nancy lives on a lake in Tennessee with her Harley-ridin’ husband, Jim, and their two yellow Labs (without whom writing would be difficult).