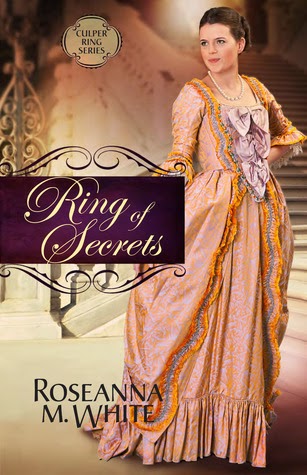 This exciting romantic spy novel from Roseanna M. White combines fascinating cloak-and-dagger secrets with a tale of love and intrigue during the Revolutionary War.

Winter Reeves is an aristocratic Patriot forced to hide her heart amid the Loyalists of the City of . She has learned to keep her ears open so she can pass information on British movements to Robbie Townsend, her childhood friend, and his spy ring. If she's caught, if she's hung for espionage...well, she won't be. Robbie has taught her the tools of the trade: the wonders of invisible ink, drop locations and, most importantly, a good cover.

Bennet Lane returns to from his Yale professorship with one goal: to find General Washington's spy hidden among the ranks of the elite. Searching for a wife was supposed to be nothing more than a convenient cover story for his mission, but when he meets Winter, with her too-intelligent eyes in her too-blank face, he finds a mystery that can't be ignored.

Both believers...and both committed to a separate cause. Will their faith in God lead them to a shared destiny or lives lived apart?

RING OF SECRETS is a Revolutionary War story… written in a very formal tone, it is a common girl, Winter, trying to force into the very proper loyalist community, trying to find a husband while acting like a witless twit when in reality she’s probably more intelligent than the lot of the debutantes. Bennet—who I think is a loyalist—trying to find a spy hidden among the elite.

Ms. White is a very talented author. One has to be in order to write in this style of language and maintain it all the way through the book. Unfortunately, for me, I’m sure, it kept me distant from the characters and I couldn’t bring myself to even pretend to like Winter, though Bennet did spark my interest a time or two. I liked Freeman the best. He was a secondary character with personality.

I probably won’t search out the other books in this series, but if you enjoy Revolutionary War historical romances, the stories of commoners pretending to be dukes and duchesses waltzing around the room and issues, in the guise of passing Intel along to others, then RING OF SECRETS is a book you might enjoy.  It was a miss for me.

Available in ebook and paperback. 352 pages.