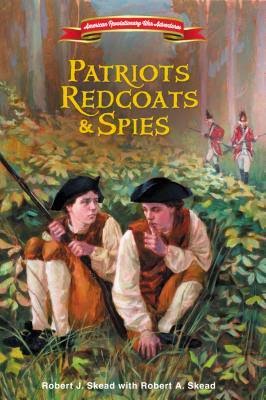 When Revolutionary War Patriot Lamberton Clark is shot by British soldiers while on a mission for the Continental Army, he has only two hopes of getting the secret message he’s carrying to General George Washington: his 14-year-old twin boys John and Ambrose. Upon discovering that their father is a spy in the Culper Spy Ring, the boys accept their mission without a clue about what they may be up against. They set off from to to find General Washington, but the road to the commander-in-chief of the Continental Army is full of obstacles; including the man who shot their father who is hot on their trail.

I loved this book. It was awesome. It had a lot of suspense and it kept me on the edge of my seat. I didn’t want to put this book down.

Lamberton Clark is a great dad and pretty courageous. The twin boys were silly and acted like normal brothers, even with little fights. I was worried they’d get caught and they would be in trouble. I had to keep reading to find out what happens.

Recommended for anyone who likes historical adventure stories. For tweens, ages 8 – 12 years.