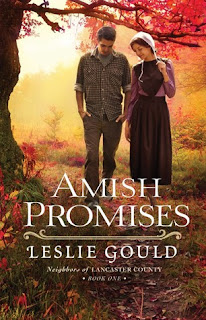 When Joel and Shani Beck arrive at their new home, they're looking for peace. Shani is thrilled to have Joel back from Iraq, but he needs time to heal, and the quiet of Lancaster seems just the place. They can't imagine any trouble with their Amish neighbors, the Lehmans, but things get off to a rocky start when their son is involved in an accident that injures one of the Lehman boys.

Eve Lehman has run her brother's household ever since the death of his wife, but Tim's a stern patriarch. Despite his protests, she's drawn to the new neighbor, Shani, and the two begin to form a strong friendship forged on faith and family. Things seem like they've quieted down until Joel's single and handsome army friend Charlie catches Eve's attention--a man unlike any Eve has ever met. Suddenly life for both families becomes more complicated than any of them could have ever imagined.

My thoughts: AMISH PROMISES is a women's fiction, the first in Ms. Gould's Neighbors of Lancaster County series. Joel is suffering severely from PTSD and Shani is determined to put their lives together and not let Joel's injuries in the war tear their marriage apart. Especially since they had a baby on the way. Eve has promised her brother's wife that she'd raise her children after she died--and would never marry an Amish man. That virtually assured that Eve would never marry at all.  Against all odds, Eve and Shani, Amish and English become friends. But Eve is no help with PTSD and Shani no help with an overly-controlling brother and deathbed promises, but still they talk. And trust...

i enjoyed traveling this road with Shani and Eve, getting to know them, their hopes and dreams, disappointments and horrors. I didn't exactly feel they became friends, but maybe acquaintances, like I peered into their lives through a big picture window, or maybe eavesdropped on their conversation. I wanted Shani to have her marriage survive the horrors of war and I wanted Eve to marry the man she loved... but whether or not either found their deepest desires, I wanted them to be happy.

There are mentions of prayer, of attending church.  The faith message  is Loving your neighbor as yourself.  I have lived in real close neighborhoods where everyone is friends and willing to help out those in need, and I've lived in areas where no one cares, you can lie dying in the street and they'd drive right past.  I really liked this message and the way the English and Amish teamed up to help each other through difficulties. And I liked some of the side messages, such as having to take responsibility for your actions, even if it was an accident and you were sorry. AMISH PROMISES is a good story with a good message and I recommend it. 4.5 stars.
at May 18, 2016