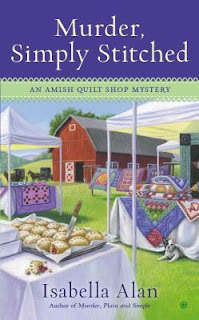 When Angela Braddock enters her quilts in an Amish auction, she never expects one of her neighbors to end up going, going, gone....
Angie is finding her niche as the new owner of her late aunt’s Amish quilt shop, Running Stitch. But as the summer is winding down, so is business. To bolster support for the shop, Angie decides to sell her quilts in the Rolling Brook Amish Auction, including some of her aunt’s most prized works.

The quilts promise to be a hit—but the gavel comes down on the lively event when Angie stumbles upon the body of township trustee Wanda Hunt behind a canning shed. The cause of death: a poisoned blueberry fry pie from Rachel Miller’s bakery table. Now Angie’s closest friend is a murder suspect. With Angie taking the lead, she and the other women of her aunt’s quilting circle set out to patch together the clues and stop a killer set on shredding the simple peace of Rolling Brook.

My thoughts: MURDER, SIMPLY STITCHED is the second book in Ms. Alan's Amish Quilt Mystery series. There are some references to the first book Murder, Plain and Simple, but I didn't find it necessary to have read the first book as it stands alone.

MURDER, SIMPLY STITCHED is written in first person, which might turn some readers off, but it didn't bother me. I enjoyed being "in Angie's head" as she tried to solve the mystery. Some of the events in the book are slap-stick comedy, some are just thrown in for shock value (I think) but it equaled a great book that I couldn't put down. I did have some suspicions who the "bad guy" was, but wasn't totally sure until it was revealed.

If you like cozy mysteries and Amish stories, you will love MURDER, SIMPLY STITCHED. A great book that I couldn't put down. 5 stars. .