Book title: The Return
Author: Suzanne Woods Fisher
Release date: Sept 1, 2017
Genre: Amish
In a wild country, the true cost of love may be more than they can bear
Beautiful and winsome, Betsy Zook never questioned her family’s rigid expectations, nor those of devoted Hans—but then she never had to. Not until the night she’s taken captive in a surprise Indian raid. Facing brutality and hardship, Betsy finds herself torn between her pious upbringing and the feelings she’s developing for a native man who encourages her to see God in all circumstances.
Greatly anguished by Betsy’s captivity, Hans turns to Tessa Bauer for comfort. She responds eagerly, overlooking troubling signs of Hans’s hunger for revenge. But if Betsy is ever restored to the Amish, will things between Hans and Tessa have gone too far?
Inspired by true events, this deeply layered novel gives a glimpse into the tumultuous days of prerevolutionary Pennsylvania through the eyes of two young, determined, and faith-filled women. 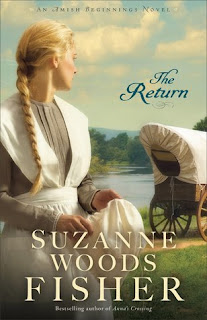 My thoughts:  THE RETURN is the third book in Ms. Fisher's Amish Beginning's series, and readers will want to read them in order starting with Anna's Crossing, then The Newcomer, followed by THE RETURN. This collection doesn't stand alone.  I did read Anna's Crossing, but missed The Newcomer. I was glad Ms. Fisher included a list of characters and who they are or I probably would've been lost.

The story (series) is based on real life events that happened in the days of the early settling of our country. The Indians and English didn't always get along and there were some brutal attacks, and of course, the Amish wouldn't defend themselves against them so it's plausible parents might be killed and children kidnapped as slaves.

Fans of historical Amish will devour this series by Ms. Fisher. The fact that quite a lot of it is real is a total draw for fans of the Amish lifestyle. Don't miss this book or this series. This is a series worth collecting by those who collect facts and replicas of Amish lifestyles and goes beyond the totally fictionalized accounts.

I've long been a fan of Ms. Fisher's contemporary Amish series and hope she'll write more of them. I'm not sure if there are any more historical novels planned but she definitely stands tall among the few that write historical Amish well.

I was given a free copy of this book. All opinions are my own.

Suzanne Woods Fisher is an award-winning, bestselling author of more than two dozen novels, including Anna’s Crossing and The Newcomer in the Amish Beginnings series, The Bishop’s Family series, and The Inn at Eagle Hill series, as well as nonfiction books about the Amish, including Amish Peace and The Heart of the Amish. She lives in California. Learn more at www.suzannewoodsfisher.com and follow Suzanne on Twitter @suzannewfisher. 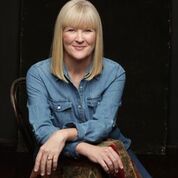 The Three Sisters’ Garden: Corn, Squash & Beans!
Corn was a new food to the immigrants to the New World, introduced to them by Native Americans. Soon, it became an essential part of their daily diet, in one form or another. Growing it brought yet another new discovery: companion planting in the form of the Three Sisters’ Garden. 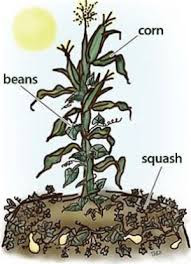 According to Iroquois legend, corn, squash and beans were three inseparable sisters who only grew and thrived together. 18th century Native Americans wouldn’t have understood the science behind why companion planting worked, but they knew it did. Beans, like all legumes, have bacteria living on their roots that help them absorb nitrogen from the air and convert it to a form that plants can use. Corn, which requires a lot of nitrogen to grow, benefits from the legumes and provides a pole support for the beans to climb. Low growing squash leaves shade the soil and prevent weed growth. Their sharp and prickly leaves deter pests. This tradition, of planting corn, beans and squash in the same mounds, became a sustainable system to provide long-term soil fertility among Native American tribes that farmed.
The wisdom of planting Three Sisters’ Garden was adopted by the immigrants, including our own Betsy Zook from The Return. Betsy learned of the technique while a captive among a tribe of Indians and later, after she had been returned to the Amish, shared her knowledge with Anna and Bairn. 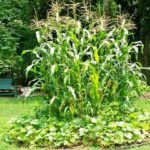 Have you ever considered growing a Three Sisters’ garden? All you need is the right kind of seeds, a mound of dirt in a sunny spot, and to not forget to water. Mother Nature will do the rest.
Suzanne Woods Fisher is a bestselling, award-winning author of novels about the Old Order Amish. Her interest in the Plain People began with her grandfather, who was raised as a Dunkard (German Baptist) on a farm in Pennsylvania. Suzanne loves to connect with readers! You can find her on-line at www.suzannewoodsfisher.com. 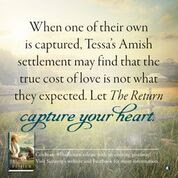 To celebrate her tour, Suzanne is doing an amazing giveaway from August 1 through 14! Check it out:
Four winners will receive one of the prizes below:
An Amish Gift Basket and a copy of The Return
Amish popcorn sampler and a copy of The Return
The Amish Beginning 3 book set series
One grand prize winner will receive:
An iPad Mini
You can enter at Suzanne’s website (http://suzannewoodsfisher.com/contests/) or on her Facebook page (http://gvwy.io/q1kb9u4) 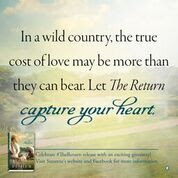 Lovely review of The Return. I've read the other two in the series when on tour, but didn't make this tour.