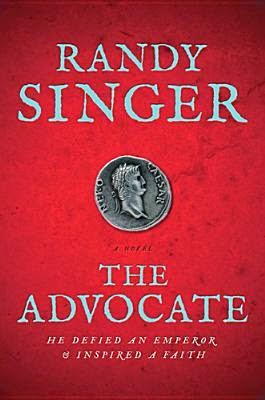 Luke, a Greek physician, Christian, and companion of the Apostle Paul, compiled the first 2-volume history of the Christian church.  We know them, respectively, as The Gospel Of Luke and The Book Of Acts.  You can find them in the New Testament portion of the Bible.

These books were each addressed to an enigmatic personage, Theophilus.  Whether Theophilus was an historical figure, or whether this was a play on words (Theophilus literally means, “Lover of God”) is still being debated.  Acclaimed author Randy Singer has taken the character of Theophilus and crafted an excellent book that centers around this young man’s training and subsequent career as a lawyer in the courts of during the time of Christ.

As assessore for Pontius Pilate, Theophilus has a ring-side seat as the greatest story ever told unfolds before his very eyes.  He is the one who suggested that Pilate offer the release of Barabbas, certain that the crowd would release the innocent man, Jesus, instead.

The plan backfired, and Theophilus would forever live with the thought that he was instrumental in the death of an innocent man.

Many years, and two Caesars later, Theophilus is once again tasked with the defense of an innocent man, the Apostle Paul.  However, with age comes wisdom, and this time Theophilus can no longer be a disinterested bystander.  It’s not just Paul’s life that hangs in the balance.

Rich with historical and cultural detail, and passionate with the mental, emotional, and philosophical forces of the day, THE ADVOCATE is a book that will help you understand the context of Christianity, and cause you to re-examine your own beliefs concerning the Jesus of history.

Reviewer’s disclaimer:  Randy Singer pulls no punches.  There are scenes that may be considered too graphic for the younger reader.