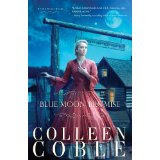 The sudden death of Lucy Marsh’s father is a shock, but it’s even more shocking when she learns that the death wasn’t an accident, Lucy decides it’d be safer to take her brother and sister and flee Indiana. She wants to be someplace where trouble will never find them. She accepts an offer of marriage by proxy to a man she never met in Texas.

Nate Stanton believes he’ll get married someday, but the right girl has yet to come along. But then Nate’s father deposits Lucy Marsh on his doorstep, proclaiming that Lucy will be Nate’s wife! While Nate’s decision about marriage is made for him, he is touched by Lucy’s determination and strength.

But despite Lucy’s fleeing her past and her sudden marriage to Nate, danger follows Lucy and her siblings. How much must Nate sacrifice to keep Lucy from harm? Who is after them? And why?

BLUE MOON PROMISE is the first book in Ms. Coble’s new series, Under Texas Stars. Full of Ms. Coble’s signature suspense mixed in with a heart-throbbing romance, readers will be kept enthralled to the very last page.

I enjoyed getting to know Lucy and Nate, and Lucy’s younger siblings, and hoped that Lucy would be able to get past the horror of her past and find a safer future. Lucy’s determination and grit was admirable. Discussion questions are included at the end of the book. $15.99. 304 pages.

***
About the book:
Book Number One in the Under Texas Stars series

A love like Lucy and Nate’s only comes along once in a blue moon . . .

Lucy Marsh's worldly resources are running out, but she's fiercely determined to care for her younger brother and sister. When she discovers that their father's recent death was no accident, Lucy is eager to leave town. She accepts a proxy marriage she believes will provide safe refuge. But trouble follows her to Texas where her new husband is surprised to suddenly have a wife and children to care for.

Nate Stanton always hoped he'd marry someday, but running the family ranch meant he had no time for romance. When his father deposits Lucy Marsh—a city girl—on his doorstep, with two siblings in the bargain, he expects ranch life will send her running on the first train out of town. But Lucy is made of tougher stuff than Nate imagined. When danger moves in, Nate finds he'd give anything to protect Lucy and the children he's grown to love. Even if it means giving up his ranch.

About Colleen:
Best-selling author Colleen Coble's novels have won or finaled in awards ranging from the Best Books of Indiana, ACFW Book of the Year, RWA’s RITA, the Holt Medallion, the Daphne du Maurier, National Readers' Choice, and the Booksellers Best. She has nearly 2 million books in print and writes romantic mysteries because she loves to see justice prevail. Colleen is CEO of American Christian Fiction Writers and is a member of Romance Writers of America. She lives with her husband Dave in Indiana.

For more about Colleen and her other books visit www.colleencoble.com

Link to buy the book: http://www.thomasnelson.com/consumer/product_detail.asp?sku=1595549153&title=Under_Texas_Stars_#1__:_Blue_Moon_Promise

Blue Moon Promise is a story of hope, romance, and suspense . . . immersing the reader in a rich historical tale set under Texas stars.

To celebrate Colleen is teaming up with her publisher Thomas Nelson for a "Blue Moon Promise" Facebook Chat party where she will giveaway a KINDLE Fire and a Texas-sized gift basket (fabulous Texas treats and fun Lucy-inspired housekeeping products)!

Button Code:
Kindle Giveaway and More! Save the Date - 3/13!

Read the book and really enjoyed it.