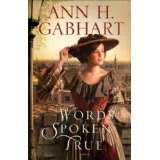 One woman stands ready to defend her newspaper—even if it means losing out on love.

Adriane Darcy’s father owns the Tribune, the leading newspaper in Louisville in 1855. Adriane was practically raised in her father’s office, and she can’t imagine life without the clatter of the press and the push to be first to get the important news. Adriane’s father has just promised her hand to a wealthy young man, and their engagement is going to be announced. Adriane cares for Stanley, but she doesn’t want to marry him…

Blake Garrett is newly relocated to Louisville from New York, and he owns a competing newspaper, and he’s determined to win the battle of the papers. Unfortunately for Adriane, he’s coming out ahead. He’s always first to get the news, sometimes seeming to know in advance when something newsworthy is going to happen. When Blake and Adriane meet, sparks fly. After all, they are each other’s enemy. But the mutual attraction is hard to ignore. But Blake will stop at nothing to get the news—and the girl.

Someone is killing Irish girls down by the river and both Adriane and Blake need to get the stories first. Not only for the sensational news stories, but in hopes of solving the mystery. Who is killing these girls? And why? Will the killer confine the killing to the Irish inhabiting that area? Or will some of the elite—possibly even Adriane, be a target?

WORDS SPOKEN TRUE is loosely based on real events that happened in Louisville in 1855. The characters are fiction, but the setting and backdrop is not. I had to admire Adriane’s courage, wits and wisdom, and her unconventional approach to getting the job done. Blake also was admirable. I couldn’t help but fall in love with him. I wanted Adriane to dump the wimpy pushover Stanley for a real man.

I like that the mandatory death in this historical wasn’t someone directly related to the heroine. And I liked that both main characters were strong-willed, with sparks. A major plus! And I liked the suspense that is worked into the plot. I didn’t even guess who the killer was until the end. Great book! $14.99. 356 pages.
at February 19, 2012

Thanks for sharing your review on this one by Ann Gabhart, I am a fan of this Ky woman, I grew up there and want to read this one for sure.
I like the fact it is based on actual events.
Paula O