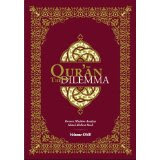 Islam is one of the fastest growing religions of the world, and The Qur'an is the foundation of Islam. It is the source of all Islamic laws and practices, religious or otherwise. The current Qur'an is divided into 114 chapters or suras of different lengths. This first volume of The Qur'an Dilemma investigates the first nine of these suras.

Each sura contains the text of the Qur'an, complemented with the following elements:

The Qur'an Dilemma also has articles of different subjects that will interest the reader such as the status of "women in Islam", the treatment of "people of other faiths", and others.

The Qur'an Dilemma also contains a glossary to help support the reader and a Who's Who section that provides a bibliographical synopsis of some Islamic scholars and historical figures.

I was interested in reviewing this book not because I am interested in the Islamic religion, but because my sons, both in different state colleges/universities in Arkansas are being taught Islam in their college career, in some of their required classes. I am upset by this, as I feel it goes against the separation of Church and State and the Muslims (and other religions) would be upset and crying intolerance if Christianity was being shoved down the throats of their students the way Muslim is being shoved down the throats of the Christian students.

This is a book that would need to be studied in detail to gain all the benefit from it that one could. I did get confused some, and decided that since I am not a student of religions that maybe this book is meant for more of a scholar of religions such as pastors, or one who is more familiar with the Islamic religion and wants to reach Muslims with the truth. I also want my sons to read it, so they will understand that it is not all that they are taught in University.

This is not a critical review of the book as I am not intelligent enough in this matter to write the review as some of the reviewers on Amazon did. But this is my thoughts as a plain ole Mom in Arkansas. $39.95 hardcover.


This is Volume 1 of a two-volume set that will, essentially, provide an introduction and primer to the Qur’ān for those who know little to nothing about the Qur’ān. The book is introduced with the subtitle, “Former Muslims Analyze Islām’s Holiest Book,” and comes across as a text-critical introduction with easy-to-understand explanations of the critical arguments. This first volume covers the first nine chapters (referred to as suras) with an introduction, analysis, variant readings, and verses that have been officially removed from the text, with explanations as to why they were removed. Volume Two will cover the remainder of the suras. In addition, there are nine articles which will provide the reader with a crash course on the world behind the Quran, addressing such topics as “Compilation of The Qur’ān,” “Women in the Qur’ān,” and “The Qur’ān and People Of Other Faiths.” The last section of this book contains a comprehensive collection of resources and references for further study.

All in all, this book on The Qur’ān will satisfy the most able scholar, as well as the most devout layman. This reviewer is looking forward to completing the collection when Volume Two comes to press.
at February 20, 2012